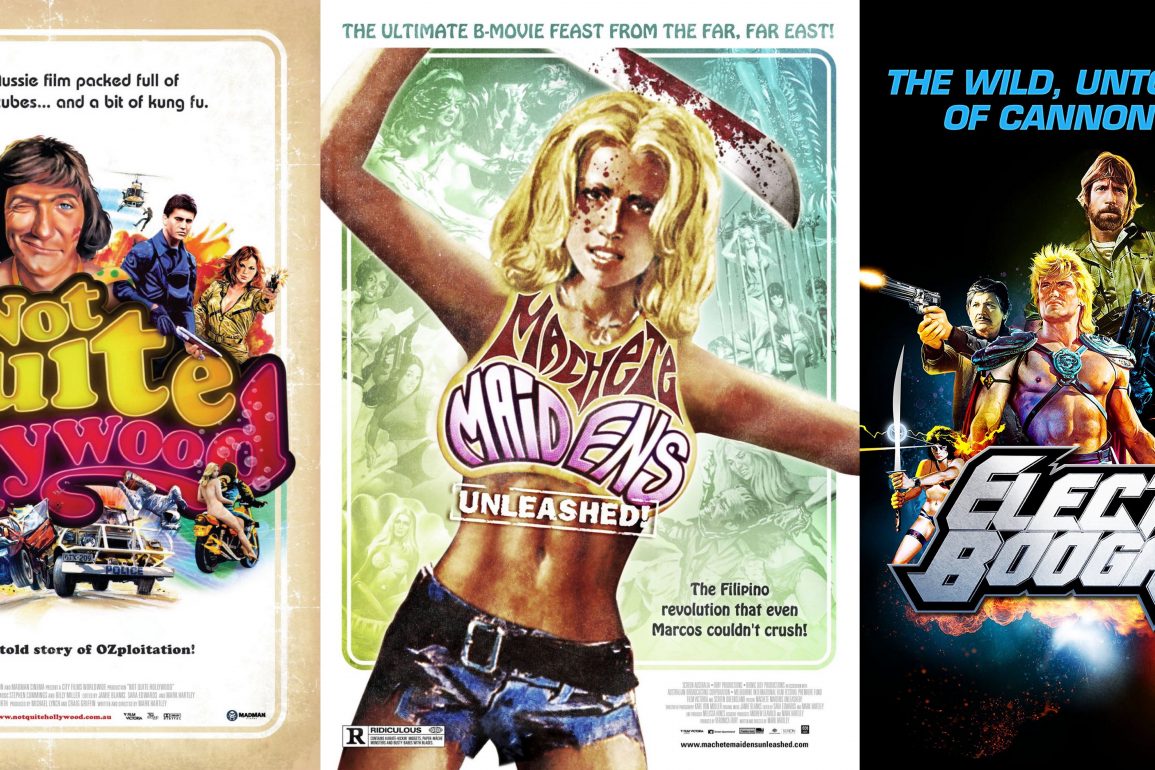 We are still in “AUSgust” and I have been progressively trying to watch one Australian movie per day for every day of the month.

The experience has been interesting, as our cinema can range from Alvin Purple to Ten Canoes, from Welcome to Woop Woop to Sweet Country, and everything in between. Last year’s AUSgust was dominated by watching heavier and more emotional films, particularly those from Rolf De Heer and Warwick Thornton, so this year needed to be a little different.

To begin it all, I finally got around to watching Not Quite Hollywood: The Wild, Untold Story of Ozploitation, and I realised that Mark Hartley, the director of this and two other movie-making documentaries, has pulled off quite a hat-trick.

I have actually watched Mark Hartley’s documentaries in reverse, beginning with 2014’s Electric Boogaloo: The Wild, Untold Story of Cannon Films, which is a masterpiece. Comprehensive and made from a place of deep love for trash, you learn unbelievable stories about egomaniacal producers, dangerous work conditions, and why Superman IV: The Quest for Peace exists (hint: desperation). The Cannon Films and Golan & Globus story is one of tremendous highs and inevitable lows, with a sweet through-line of appreciating the knack for just trying to make something, no matter what.

Then there’s 2010’s Machete Maidens Unleashed, which covers the exploitation films made in the Philippines from the 1960s and 1970s, the audacity of Roger Corman and New World Pictures, and the insanity of making absolute garbage in deadly conditions. This documentary isn’t as wildly enjoyable or as comprehensive as Electric Boogaloo, but still delights with its absurdity and love for filth.

And when you work backwards as I did and you finally get to the one that started it all, you fully understand where Mark Hartley is coming from. Not Quite Hollywood is perhaps the most lovingly crafted and personal, Hartley being Australian and probably pinching himself getting to interview people like George Miller, Russell Mulcahy, Fred Schepisi, Brian Trenchard-Smith, John Seale, Steve Bisley, Jack Thompson, and Barry Humphries.

On that note, the interviewee list for each one of the documentaries will get you up and yelling “how the hell did they get THEM?”.

For Not Quite Hollywood, the biggest of the list is Quentin Tarantino, providing the most amount of knowledge and passion for Aussie exploitation films (surprise surprise: Tarantino is passionate). But then you have Dennis Hopper, Jamie Lee-Curtis, Stacey Keach, James Wan, Leigh Whannell, George Lazenby, Greg McLean, Graeme Blundell, Anthony I. Ginanne, and stuntman extraordinaire Grant Page, among dozens of others.

And then for Electric Boogaloo, it gets even better. While the then-alive Golan and Globus denied to be interviewed, we still have Dolph Lundgren, Elliott Gould, Molly Ringwald, Tobe Hooper, Alex Winter, Richard Chamberlain, Franco Nero, Marina Sirtis, Bo Derek, John G. Avildsen, and the legendary Franco Zeffirelli (of course among many more).

There is, however, some elements of each documentary that don’t hold up well. In Not Quite Hollywood, Tarantino’s stories can veer wildly into expressing his sexual desires for certain women or one anecdote about jerking off to car stunts. In Machete Maidens Unleashed, one of the most prominent interviewees is John Landis, who rants on about how funny the danger of Filipino exploitation movies were, darkly ironic as he is still infamous for irresponsible work practices that killed three people on the set of the Twilight Zone. Electric Boogaloo is mostly clear, but there is one anecdote from Frank Yablans about the Weinsteins being more successful that Golan and Globus as they “care about quality”. Yikes.

In any case, I still love these films. Mark Hartley edits or at least co-edits all three of his documentaries and each one has a particular manic energy, every story about every film flowing seamlessly one to the next, some stories overlapping and others just out-right contradicting each other. You learn about the kind of film history that mainstream and more respected books would never teach you, but it’s all worthy. Learning about the production of Mad Dog Morgan, the career of Weng Weng, and the entire mentality Golan and Globus is just as important as learning about the Golden Age, New Hollywood and the indie film boom of the 90s.

These stories of multiples decades that span the globe and have defined, for better and worse, the careers of passionate filmmakers are profound, touching, and inspiring. No matter who you are or how bad you think your movie might be, in several decades a hundred equally passionate people will pool together in multiple documentaries and tell your story. These movies that each documentary looks at may be the furthest things from cinematic classics but real people still made them. Mark Hartley has given us three wild and untold stories that are beyond equal, and I hope he continues to tell many more to come. Maybe something about Carolco or the entertainment productions of Vancouver or Atlanta. Whatever he does next, I am there for it.

All three documentaries are available on Blu-ray and DVD, with Machete Maidens Unleashed being available on DocPlay now.