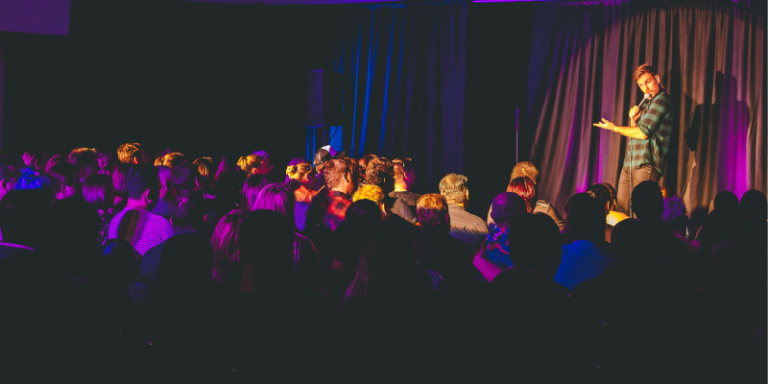 One of Scotland’s finest stand-up comics, Larry Dean, has a slew of awards under his belt including Scottish Comedian of the Year (2013) and Amused Moose Comedy Award – Edinburgh Festival (2016), among others, and he brings his hour-long confessional storytelling to the fore with ‘Fudnut’ on Saturday 9 May at the Perth Comedy Lounge.

Canada’s Angelo Tsarouchas proudly parody’s his Greek origins and returns to Perth Friday 8 May presenting ‘Mythology’ at the Perth Comedy Lounge; speaking about his issues of living in today’s society, family, marriage and his father’s dream of living on a planet where the only language was Greek!

Winner of the 2019 Edinburgh Comedy Award and the Chortle Comedian’s Comedian Award 2018, Jordan Brookes (UK), makes his maiden voyage to our shores with a performance of his show ‘I’ve Got Nothing’ on Friday 8 May at the Astor Lounge.

A firebrand comedian with outrageously quick wit and an improv style that leaves audiences gasping for air, Dusty Rich’s (RSA) predictably unpredictable show ‘Bad Idea’ is one not to be missed. The South African funny man performs on Friday 1 May at Studio Underground.

Aussie actress, TV presenter and former model-now-comedian Nikki Osborne, best known as the host of Ch 9’s Quizmania as well as appearances on Celebrity Name Game, Show Me The Movie and Hughesy, We Have a Problem – makes her Perth Comedy Festival debut with ‘On the Spectrum’ at the State Theatre Centre of WA – Studio Underground – Saturday 12 May. In what was the most controversial and talked about show of the Melbourne International Comedy Festival, Nikki presents a heart-warming and hilarious insight into what it’s like living with someone who has autism.

Known for his ability to adapt any crowd and throw relentless comedy blows showing the lighter side of much darker subject matter, Jacques Barrett returns with the longest show title in the festival – ‘I Just Turned 40 So Obviously Here’s a Show About World War 2’ at the State Theatre Centre of WA Studio Underground on Saturday 12 May.

With brilliant one-liners and laconic, dry-witted on-stage charisma Daniel Townes was a stand out at last year’s festival and returns with ‘Little Ray of Sunshine,’ a brand new show about life, naivety, luck, unrealistic expectations, work, the cost of life, relationships, unconditional love, family, mortality, death and his dog on Friday 24 and Saturday 25 April at the Regal Theatre.

The 2020 Perth Comedy Festival also sees the return of some of our favourite Aussie comics including Effiewith ’Love Me Tinder’, Alex Williamson with ‘Oi Mate!’,Alice Fraser with ‘Chronos’, Matt Okine with ‘Solo Diner’, Nazeem Hussain with ‘Hussain That?’ and Cal Wilson with ‘Open Book’.

The Perth Comedy Festival also presents three Galas at The Regal Theatre (22 April, 29 April and 6 May); three festival showcases for our friends in Fremantle at Rock Rover  (23 April, 30 April and 7 May) as well as The Biggest Comedy Show on Earth – which is basically speed dating with comedians – Thursday through Sunday throughout the festival commending 23 April.
Get your tickets now via www.perthcomedyfestival.com