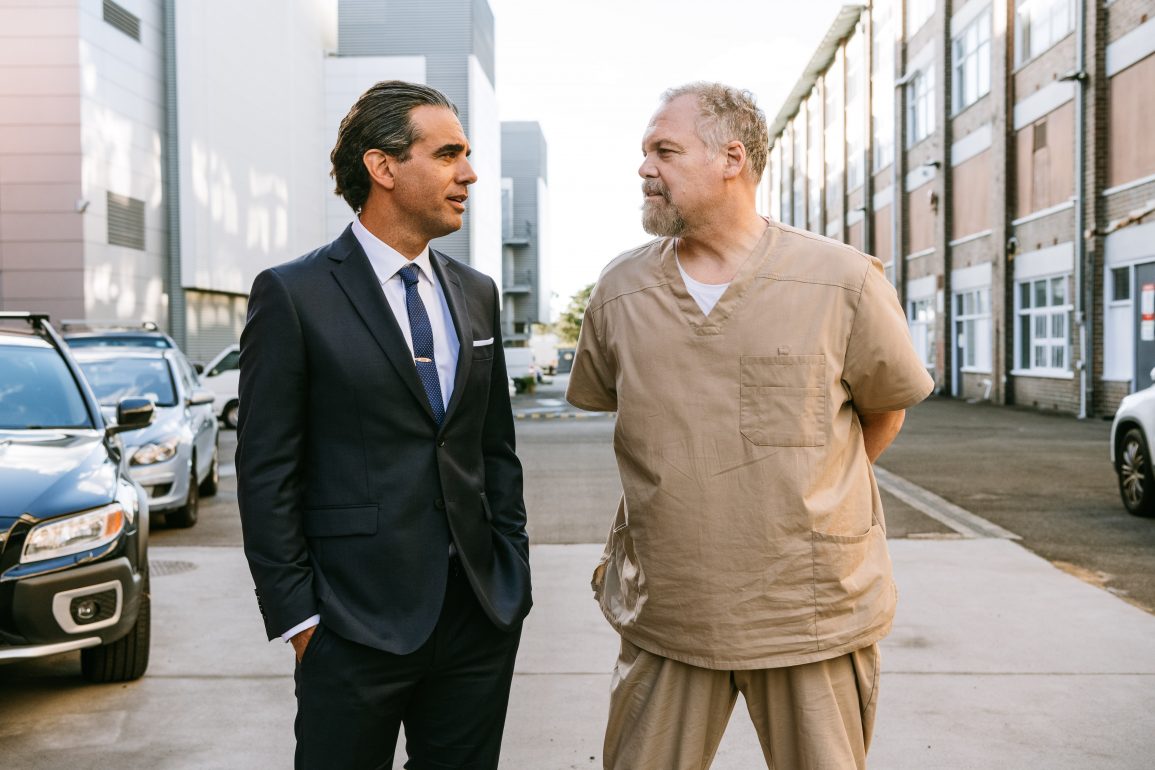 The Moth Effect, the daft and joyous journey into comedy satire that brought us a bungling 80s time-traveller who gets caught in an incest time-paradox, a David Attenborough “Kaiju”, a psychopathic Smart Pillow, an ice cream company tackling the military industrial complex and a “woke drone” has one more surprise up its sleeve, with Hollywood stars Vincent D’Onofrio and Bobby Cannavale starring in the show’s finale sketch, dropping on Amazon Prime Video tomorrow, Friday 3 September.

Creators Nick Boshier (Bondi Hipsters, Soul Mates, Beached Az, Trent From Punchy) and Jazz Twemlow (Tonightly, The Roast) have been thrilled with the response to the series over the last five weeks and still can’t quite believe their luck when it comes to their incredible cast.

The final sketch didn’t come about the same way as most others in the show, which were written first and then cast second.

“We knew Vincent was keen to work with us but we’d already wrapped shooting weeks before and were into post-production. Suddenly we had this opportunity to write towards a revered actor known for conjuring distinct characters. Anyone who doesn’t have “Edgar the Bug” from Men in Black seared into their brain has something wrong with them! We knew a Bond villain would give Vincent a lot of room to play, so we got to brainstorming how we could use a Bond parody to say something the show hadn’t already said,” explains Twemlow.

Cannavale stars as James Bond opposite D’Onofrio’s arch-villain, “Stavrick Varatanga”. Like much of the show, the sketch explores a contemporary problem through a daft execution of a pop culture reference. Given the name of the show, it was a great send off, as Bond is quite literally distracted by a superficial, “bright shiny thing” which impacts his ability to connect with something more important. It’s this approach that The Moth Effect has explored so successfully to date: big topics tackled in an absurd way.

“This really was a case of stars aligning to create a sketch that plays off their insane talents perfectly. Bobby gave us a Bond that’s so true to the character yet is also definitely a sketch comedy version of that archetype. It was amazing being on set watching him elicit his version of Bond that’s a tightrope walk between believable yet also totally daft. We were so lucky.” said Boshier.

The finale episode also sees glamorous contestants competing for an inanimate television’s affections in a new reality TV show, “Who Wants to F**k a Television?”, a sacred birthing tree is rescued by experts of “protecting sh*t”, a hostage experiences an interrogation routine much worse than good cop / bad cop and a medical experiment gets derailed by the placebo effect.

Sign up for a free 30-day trial and binge watch all six episodes of The Moth Effect on Amazon Prime Video from this Friday 3 September.