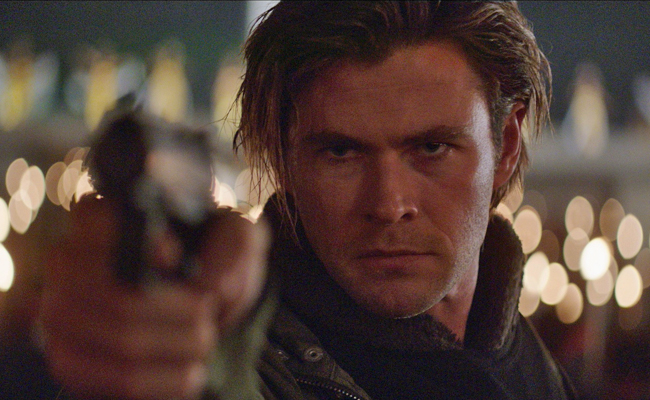 Without a doubt, the worst crime that Michael Mann’s hacker drama Blackhat enacts is that it is exceptionally boring. Chris Hemsworth stars as convicted hacker Nick Hathaway who is brought out of prison to help find out who was responsible for the attack on a Chinese power plant. Along the way, he is joined by his close friend Chen Dawai (Leehom Wang), his sister Chen Lien (Wei Tang) and FBI agent Carol Barrett (Viola Davis).

While truly terrible films are usually terrible for a reason – whether it be racist, or maybe it’s appalling dialogue or acting – Blackhat is terrible simply for being boring. Hacking has always been a difficult thing to display as ‘entertaining’ on film. Simply put, watching people type quickly with a keyboard is a fairly unexciting action (I should know, that’s my job) and unfortunately not even Michael Mann’s usually solid direction can elevate this tedious task here. Displaying this group of people accurately has always been difficult – it’s usually wildly off base as seen with ‘leet haxors’ such as Angelina Jolie in Hackers or Kevin Smith in Live Free or Die Hard – and Chris Hemsworth’s finely chiselled ab’s and golden locks of hair don’t do anything to help build up an accurate portrayal of what a hacker is.

This is not to say that his ‘finely chiselled ab’s’ don’t play into the plot of the film. When we first meet Hathaway, he’s doing his best Nic Cage in Con Air impression as he works out in his prison cell. This is later explained as him seeing that his time in prison doesn’t have to be a prison sentence – he can still make himself a ‘better person’ by working out, by improving himself, for when he’s out of prison. Unfortunately, this is about all the character development we get with this role. We get even less development with his romance with Chen Lien, who is bundled up with Hathaway early on and after a scene or two they’re in bed together getting it on. Then in a short time they’re talking about the future together, with her brother talking to Hathaway about ‘don’t go breaking her heart’. It’s hard to tell if these two characters knew each other before Hathaway ended up in prison, even though apparently Hathaway and Dawai are best of friends. It’s character association simply to create a plot. Never for once are these relationships believable, and it’s not due to bad acting. These characters are simply not written well enough to give the usually fine actors anything to work with.

Lien’s relationship with her brother Dawai is limited to off the cuff comments about ‘remember that restaurant that we went to for your birthday’ and brief text messages. I’m still not entirely sure why she’s even part of the investigation. Unfortunately, underwritten characters litter the film, making even great seasoned actors like Viola Davis struggle with bland dialogue and fail to build a three dimensional character. This is furthered by the supremely under developed villain, Elias Kassar (Ritchie Coster), who is also supposed to be a ‘leet haxor’, but instead turns into a ‘generic Middle Eastern villain’ who wants to… do something to the soy stocks and flood farmland. It’s not entirely clear.

I had initially thought that the underwritten villain was Mann’s way of commenting on the anonymity of the internet and not knowing who you’re talking to on the other side of the world – but, when he does appear he’s so poorly developed that it throws any chance of an analogy out the window. Add in the fact that his motive is so poorly explored that when he combats Hathaway and co. in some of the most unexciting gunfights of 2015, you’re hard pressed to actually care who gets shot, or what the outcome is. The stakes simply are not there and the McGuffin is not interesting enough to carry these boring characters through to a boring conclusion.

Michael Mann is known for creating superb, immersive, and explosive action sequences, but here they’re flat and bland with lots of side on shots of people shooting guns. Gone are the exciting shoot outs from Heat and Miami Vice. Alongside these unexciting shoot outs are almost stock footage like shots of data moving through computer memory boards. A personal gripe I have with these sorts of sequences is the manufactured sounds that are designed to show that ‘something is happening’. Usually you’ll find these sounds implemented when the camera moves through a window, or somebody is typing, and they’re always annoying. I can guarantee, no ‘leet haxor’ is going to have a computer display that will emit a sound for every key stroke.

I guess the most frustrating aspect of Blackhat is that there is a kernel of a good idea here that is worthwhile exploring. The assessment of espionage in the digital age is an interesting theme to explore, but unfortunately that simply isn’t done to a notable effect here. Michael Mann has proven that he’s one of the finest directors working in Hollywood today, yet this is quite easily his weakest film yet. Where sometimes you could pinpoint a reason to watch a notable directors failures, there is simply nothing here that a Michael Mann fan – or for that matter, anybody in general – should slog through to see.