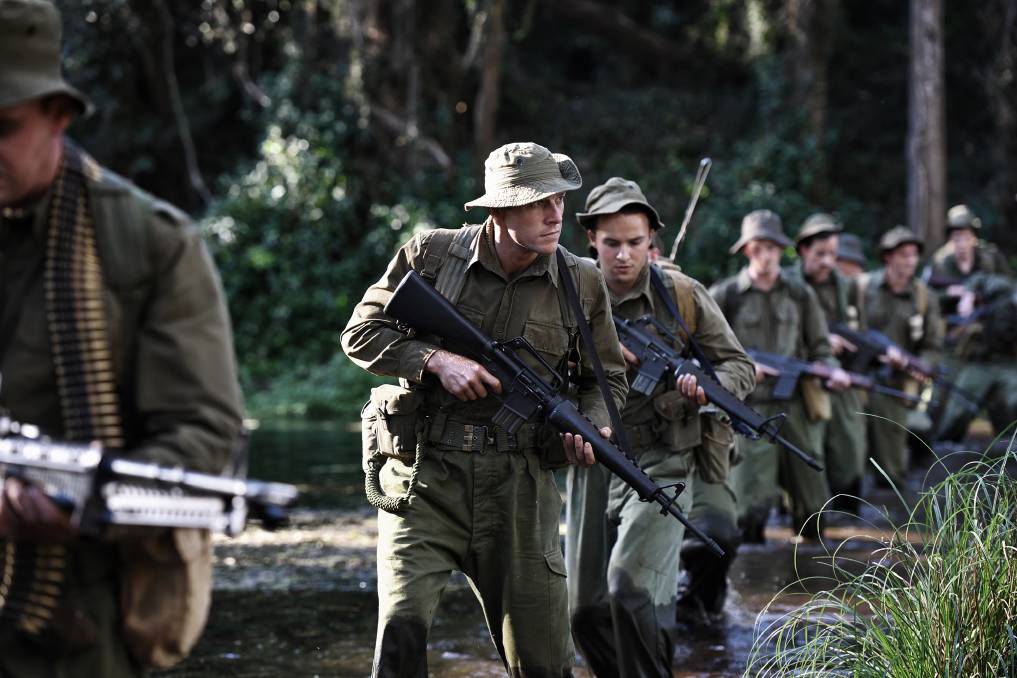 It’s been 40 years since Australian cinema explored the combat soldier’s experience of the Vietnam War. While David Caesar’s Dirty Deeds (2002) featured a brief early interlude in the field with Sam Worthington’s criminal-in-the-making, and Wayne Blair’s The Sapphires (2012) followed an Indigenous girl group on the USO circuit, we have to go back to 1979 and Tom Jeffrey’s The Odd Angry Shot for a cinematic account of diggers in Vietnam. In the interim we had a couple of television exercises in the form of Sword of Honour (1986) and Vietnam (1987), but Australia’s role in what was, for the Anglophone West at least, the defining conflict of the late 20th century has rarely been touched upon in the cinematic space. That’s now changed with the upcoming release of Kriv Stenders’ Danger Close: The Battle of Long Tan.

Set in 1966 (August 17 – 19, to be precise), the long-in-gestation film tells the tale of the clash between a small Australian force of volunteers and conscripts and a much larger mixed force for Viet Cong guerillas and People’s Army of Vietnam (or North Vietnamese Army, if you prefer) regulars in the titular rubber plantation. Like Ridley Scott’s Black Hawk Down (2001), it’s the story of one single military action, and it maps its narrative rhythms fairly accurately onto the known facts of the engagement. Like Alister Grierson’s Kokoda (2006), its something of a “lost patrol” movie: after reconnoitering the plantation looking for enemy artillery positions, Delta Company under the command of Major Harry Smith (Travis Fimmel) is cut off from their home base at Nui Dat, and must hold off wave after wave of assaults while hoping for rescue or reinforcement. Meanwhile, back at the ranch, Brigadier Jackson (Richard Roxburgh) and his staff wrestle with whether to send relief, which would leave their base open to attack, or write off the encircled men as acceptable casualties.

Danger Close is not the best Australian war movie ever made, but that’s because we live in a universe where Peter Weir’s Gallipoli (1981) and Bruce Beresford’s Breaker Morant (1980) happened (it’s Morant, by the way). It certainly deserves to be in the conversation, though, and it’s not overstating the case to call it the best depiction of realistic combat yet seen in Australian cinema. Stenders, working from a script by Stuart Beattie (Pirates of the Caribbean: Curse of the Black Pearl, Collateral), takes pains to keep the audience cognisant of everything that’s happening on a strategic, tactical, and personal level. We spend most of our time in the mud and the trees with the troops on the ground, but cutting back to base and the larger decisions being made and forces in play ensures we see how it all connects together, the macro to the micro, everything in constant motion and perpetual crisis. It’s propulsive, technically superb stuff, a series of contained but interlinked sequences of rising action and catharsis that never lets up.

War movies by and large focus almost exclusively on infantry actions – all the better to show personal drama and heroism – but Danger Close goes out of its way to show the importance of both artillery – every successful barrage by a nearby New Zealand battery is a rousing moment – and communications. Radio contact is shown to be absolutely essential, with moments of severed communications – a bullet-riddled field pack at one point, a fried base station at another – being moments of high tension. It’s a frequently overlooked element, and it’s impressive to see how its importance here is highlighted and dramatized.

That’s veering close to armchair military history, though (and yeah, I’ll cop to being prone to that) – what’s going to sell Danger Close to audiences is the personal drama. Beattie’s script is robust and functional without being, on the personal level, exceptional. He’s constrained by both the known facts of the events and the reverence (deserved or otherwise – here’s not the place) to the Aussie digger that almost invariably accompanies these films. Being event-based rather than arc-based, character journeys are necessarily shorthanded and compact. The most visible human relationship is between Fimmel’s Major Smith, a professional, commando-trained soldier who resents having to lead a unit of reluctant draftees, and Daniel Webber’s Private Paul Large, a skiver who steps up when the lead starts flying. Action is character, as the saying goes, and given that battle is, by definition, pretty much all action, we get characters defined very much by what they do; complexity is a necessary sacrifice.

It helps, then, that Stenders has assembled an incredible cast; indeed, Danger Close is certainly a candidate for the best (majority male, but what are you gonna do?) Australian cast in recent memory, with Luke Bracey, Nicholas Hamilton, Mojean Aria, Travis Jeffery, Aaron Glenane, Anthony Hayes, Aaron McGrath, Myles Pollard, and more filling out the ensemble. There are moments when the language of the period and scenario feels a little uncomfortable in the mouths of some of these young actors, (and I’m pretty sure the use of the phrase “We’re not here to fuck spiders” is an anachronism), but those moments are fleeting – this is a rock solid cast leaving it all out on the field.

Like the aforementioned Black Hawk Down, Danger Close is told squarely from the point of view of only one set of belligerents, which has been a sticking point for some commentators, but Danger Close’s politics are largely subtextual and metatextual; Australia’s resistance to conscription is fairly well dramatised, and the anti-war sentiment we think of when reflecting on the Vietnam War really crested later in the decade (although the American movement was certainly ramping up in ’66), so its relatively muted presence here is understandable.

What really impresses, though, is how Australian Danger Close feels. It’s not just the presence of L1A1 SLR rifles, Owen submachineguns and various other production design elements; the film is culturally Australian. A concert for the troops that features as a parallel narrative stream involves Little Pattie (Emmy Dougal) and Col Joye (Geoffrey Winter), and you don’t get much more “early ‘60s Australian” as that. For all that we venerate the Anzacs, our deeply ingrained cultural cringe as Australian media producers and consumers means that we tend to keep our military history at arm’s length to some degree, honouring it in the abstract while downplaying the specific. It’s our way, and it’s regrettable; on some level we don’t like ourselves and our national character, and we don’t want to do the introspection necessary to correct that. Danger Close doesn’t begin to do the hard yards in that respect, but it also doesn’t beat around the bush when it comes to representing, if not interrogating, the Australian Vietnam War – this is, by intent and by impact, our Vietnam movie. It’s what we’ve got.

Which means, of course, that it closes with “I Was Only 19 (A Walk in the Light Green)”, and whether that’s a solid choice or a bridge too far is in the eye of the beholder; it was, let’s agree, inevitable, though, and I think that musical choice underlines the film’s marked attempt not to fall to blind patriotism. Not does it tend towards self-flagellation over what was, as history ably demonstrates, an unjust war. Danger Close’s boots-on-the-ground approach is intentional, and its focus is deliberate. It’s no small achievement, juggling historical, dramatic, and political demands with considerable dexterity, and the result is a film whose place in the Australian pantheon is assured.