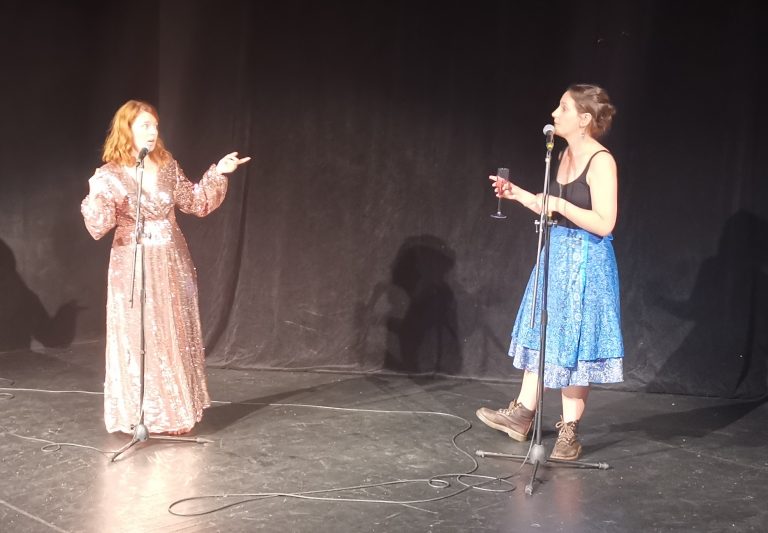 Hour Of Power – With Katie Lees And Grace Rouvray Review

Katie and Grace’s Hour of Power

Reviewing stand up comedy is a tricky bit of business, comedy as a whole being an extremely subjective artform. The only real test, all politics and cultural assumptions aside, is “Did I laugh?” Well yes, yes I did. I laughed like a drain. I imagine you will too.

Hour of Power is a two woman show from comedians and old drama school buddies Grace Rouvray (600 Bottle of Wine) and Katie Lees. After a two-hander opening bit, the pair take turns working the mic with tales of disastrous app dating hook ups, terrible jobs, the travails of being a bridesmaid (Rouvray is a seven round wedding party veteran and considers the movie Bridesmaids a documentary) and more. The themes are obvious but resonant: it’s hard out here being young, (mostly) single, and struggling to make your mark in the arts, but friendship is comforting salve in these trying times, and so is prosecco. There’s nothing too high-falutin’ going on in terms of concept, but that makes the material all the more relatable; our hosts aren’t pushing the boundaries of the artform, but they’re re-telling ribald tales of 21st century urban life we can all plug into to some degree.

Addison Road’s Flight Path Theatre is a small venue, and so there was a real sense of intimacy as the show unfolded – you’re close enough to see every tic, flick, and change of expression and none of it rang false, with Rouvray in particular showing a real flair for stage work. Their banter and rapport are impeccable, with the two tossing lines and rejoinders back and forth with crackerjack timing.

The highlights? Lees comparing oral sex from a lazy lover to a cat disinterestedly licking its paws comes to mind, as does Rouvray acting out a drunken hen’s night entourage trying to order drinks at a bar (Christ, I’m laughing right now), and the litany of brutal nicknames for boyfriends and flings leaves you thinking you might be better off dating Taylor Swift – at least you’d stand a chance of being the subject of a Grammy-winning song.

Rouvray and Lees make for a pretty fantastic double act and I’d be keen to see where their collaboration takes them next. The humour and pathos in play puts me in mind of the sort of drily cutting stuff that Jean Kitson and Wendy Harmer used to pull off so effortlessly on The Big Gig back in the day, which means a) they’re in good company, and b) I’m old as fuck. Someone should give these two a development deal stat. Get along while you have the chance – the venues will be bigger and the tickets pricier before too long.

Check out Andrew’s interview with Katie and Grace here.