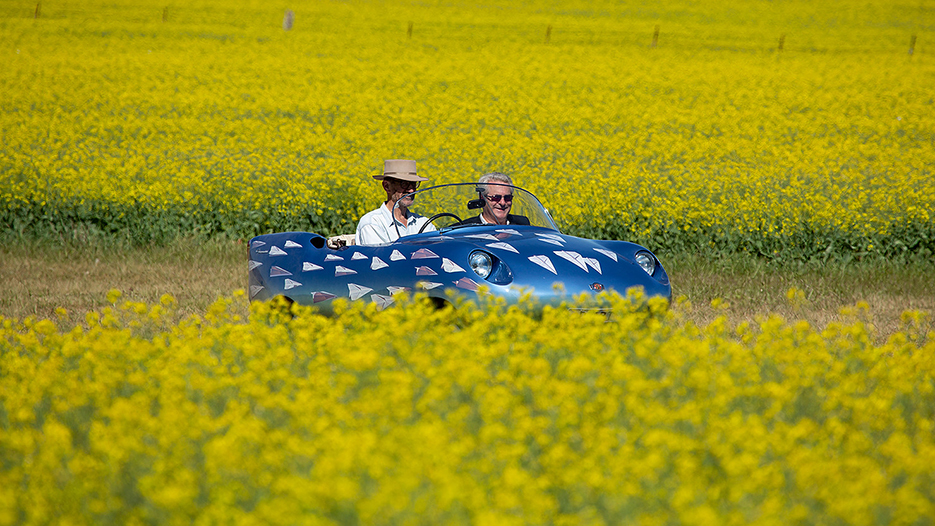 What can an audience expect from a documentary about an art project that began with two old mates, one a painter and the other an eccentric collector, discussing what it would be like to paint a rare car in a unique manner? A lot of fun and an incredible amount of word and visual play on the notion of the dart. In the case of Karl von Moller’s documentary, D’Art, the dart is at least three things – it’s a paper aeroplane motif favoured in the work of painter Robert Clinch, it’s also a the name of a miniature Australian sportscar the Goggomobil Dart, and finally it’s what happens when you put these two concepts together and there is made an objet d’art (French for Art object, a piece of art that is not traditionally a painting or drawing).

Jeff Brown is the son of one of Australia’s most powerful doyens and collectors of Australian Art, Joseph Brown. During his many years collecting, the Brown family befriended the respected Australian artist Robert Clinch and started collecting and representing his works. Joseph Brown acted as both dealer and mentor to Clinch and on his death, the closeness between the two men had reached a level that Clinch was also considered an intimate of Jeff and his art collector wife Annie.

To describe Jeff as a collector is perhaps a little one-dimensional – he’s an enthusiast who enjoys finding unique pieces and adding them to his unconventional collection that includes everything from early computers, a one of a kind flight simulator and his true passion; rare racing cars. His wife Annie is also a collector, although her tastes run towards the more traditional modern art objects, yet her enthusiasm is equal to her husband’s.

Robert Clinch is one of Australia’s foremost contemporary artists. He is known for his mostly urban and industrial scenes set in and around Melbourne. Although at first glance they seem to be quite traditional realist pieces, he often adds an aspect of whimsy to his work and in many cases this is the paper aeroplane or dart. Clinch is an exacting and fastidious painter who generally works in media such as the difficult egg tempura on incredibly detailed paintings. After a few drinks one night with his friend Jeff, one of them suggested what if he were to paint his famous darts on another famous dart – the Goggomobil dart of the 1950s designed by Australian Bill Buckle. Neither man can recall who came up with the idea, but when Jeff Brown found a Dart at auction it was essentially a done deal that Clinch would indeed paint darts on the dart to create an objet d’art.

For most people the Goggomobil is best known as the subject of one Australia’s longest running television advertisements for The Yellow Pages. Starring Scottish/Australian actor Tommy Dysart, a man calls around somewhat helplessly looking for parts for his Goggomobil – spelled G-O-G-G-O. The car is such a rarity that he’s having a lot of trouble finding someone who even knows what it is. Eventually thanks to the Yellow Pages he finds someone who knows what he’s talking about and his next line is “It’s not the Dart!” The advertisement is part of Australia’s collective consciousness for many. Karl von Muller and his team bring Dysart into the mix with a knowing nod to what little we do know and don’t know about both the car and Dysart himself, who was a well-known actor before taking on the commercial that made him a household name.

The Goggomobil was a German invention of the post War era where people were looking for cheap and fuel economical vehicles for general transport. The standard German Goggomobil was more akin to a Morris Minor or Volkswagen Golf; a small boxy contraption that was fit for purpose but not very attractive, whereas the Dart was a sportscar. Engineered by Bill Buckle who took the original steel design of the miniature sportscar and changed it to a fibreglass model, the Dart was an attractive and cost effective sportscar for the Australian lifestyle. What it wasn’t for however, was for going too fast with many drivers finding going over 60 miles an hour not so much a hair-raising experience but one that challenged the tiny engine. Despite looking like an invention straight out of The Jetsons it was not devised to move at the speed of light!

Once Jeff Brown found the Dart and got agreement from Clinch to paint his iconic paper darts on the car he got into touch with the director to document the somewhat eccentric journey of a car that would be a sculpture and a piece of fine art as well as a feat of the originally clever design. D’Art brings together an unconventional group of people to discuss the project that range from other car collectors Bill Hemming and Paul Faulkner, gallery owner Lauraine Diggins, Tommy Dysart and his irrepressible wife Joan, Jeff Brown’s financial consultant, fine art historian David Thomas, and former director of the NGV and NGA Dr Gerard Vaughan. The mix of people speaking about the project is in itself a good indication of the purpose of the project – a venture that sits somewhere between the world of fine art, engineering, and the peculiar world of the obsessive collector.


For artist Robert Clinch, the project represented the first opportunity to move his art on to a three-dimensional canvas which provided him with a set of challenges he had to overcome. Famous for painting in egg tempura and sometimes watercolour, Clinch’s industrial scenes are immensely complex and almost photorealist in their detail. There is a level of perfectionism that is part of Clinch’s professional output and personal approach to art. The perfectionism at times made the process of painting the Goggomobil daunting. He had to learn to embrace new techniques and also relinquish a lot of control over how the painting would be done by engaging professional car painters and detailers. After a sometimes gruelling excursion of trial and error eventually Clinch found a way to work his darts on to the Dart. However, the timeline was tight for him and he suffered the personal loss of his father as well as a cardiac event during the project.

Clinch and Brown approached the Dart project from the position of two men embracing the beauty of engineering and fine art. Clinch who came from an engineering family and turned to painting, Brown came from a family famed for its relationship with fine art and turned to engineering as his passion – especially in his love for collecting, working on and racing sports cars. For them it was an opportunity to bring together a shared legacy and to create an object that would bring a sense of fun to the viewers. Painting cars as art pieces is not a completely novel idea as artists such as Andy Warhol, Jeff Koons, Ken Done, and Michael Nelson Jagamarra had undertaken similar projects. The great Australian artist Arthur Boyd painted a fridge. Brown however still intends on driving the Dart (and in the documentary is shown doing it) once it returned from its exhibition tour which can be followed via www.goggodartproject.com.

Perhaps, in a sense, D’Art reveals a certain level of the passion that veers into obsession in both the professional collecting world. At more than one juncture, discussions of just how expensive the project turned out to be were had with Brown’s financial advisor. Eventually however enthusiasm won over the fiscal concerns and the project went full steam ahead. Ironically the year that most of the work was done was 2017, which also saw the final closure of car manufacturing in Australia, so in a sense the Dart is an artistic elegy for a once essential part of the Australian manufacturing market.

Robert Clinch muses that the paper darts “tell stories about imagination… ideas take flight. The paper dart is transient, it doesn’t last forever, and flights of fancy are like that – they come to us and are gone unless we do something with them.” In being the artist in the Dart project Clinch took a fairly ephemeral idea and went with it. Like the paper dart that he describes as “float(ing) to a destination, they’ve got a purpose” the Goggomobil Dart project gave flight to an idea and through determination a piece of art that was a combination of other art forms was formed.

Jeff Brown is described by one of his fellow collectors as “Manic and obsessive… it’s like putting jumper leads on your nipples talking to Jeff.” Perhaps it is indeed that kind of wild enthusiasm that gets such outré and interesting projects like the Goggomobil Dart Art project off the ground. Strange as it may seem on paper, and at times in reality, the project brought a lot of joy to almost everyone involved and as the car travelled, it gave the public the opportunity to see a car that is a slice of another time merged with the iconic signature of one of Australia’s preeminent artists. In the end it’s a quirky and fun documentary about the merging of ideas and obsessions and how both engineering art moves from concept, through to the drawing board to be worked on over and over until at the end an object of wonder is produced. D’Art captures that process for not only the Dart project, but also makes a broader statement about how inspiration and artistic merit can be found in places that seems less likely that the hallowed wall of a major cultural institution. The Dart may not be to everyone’s taste, but it was a work of art on creation and now has a new level added to that.

D’Art is in essence a fun journey but also a meditation on Australian culture and the culture of fine art. However, with Tommy Dysart and Joan balancing out the serious aspects of the film, fun seems to be first and foremost. It’s also a fascinating look into the process of making art, especially as the audience is give access to Clinch’s process. What really makes the film stand out is the way it works with the many personalities involved with the project and through them explains how a passion for what we can create brings us together in unusual ways and sometimes, like the Goggomobil Dart objet d’art, creates something quite surprising and joy filled. 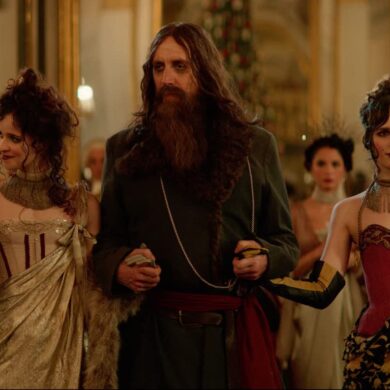