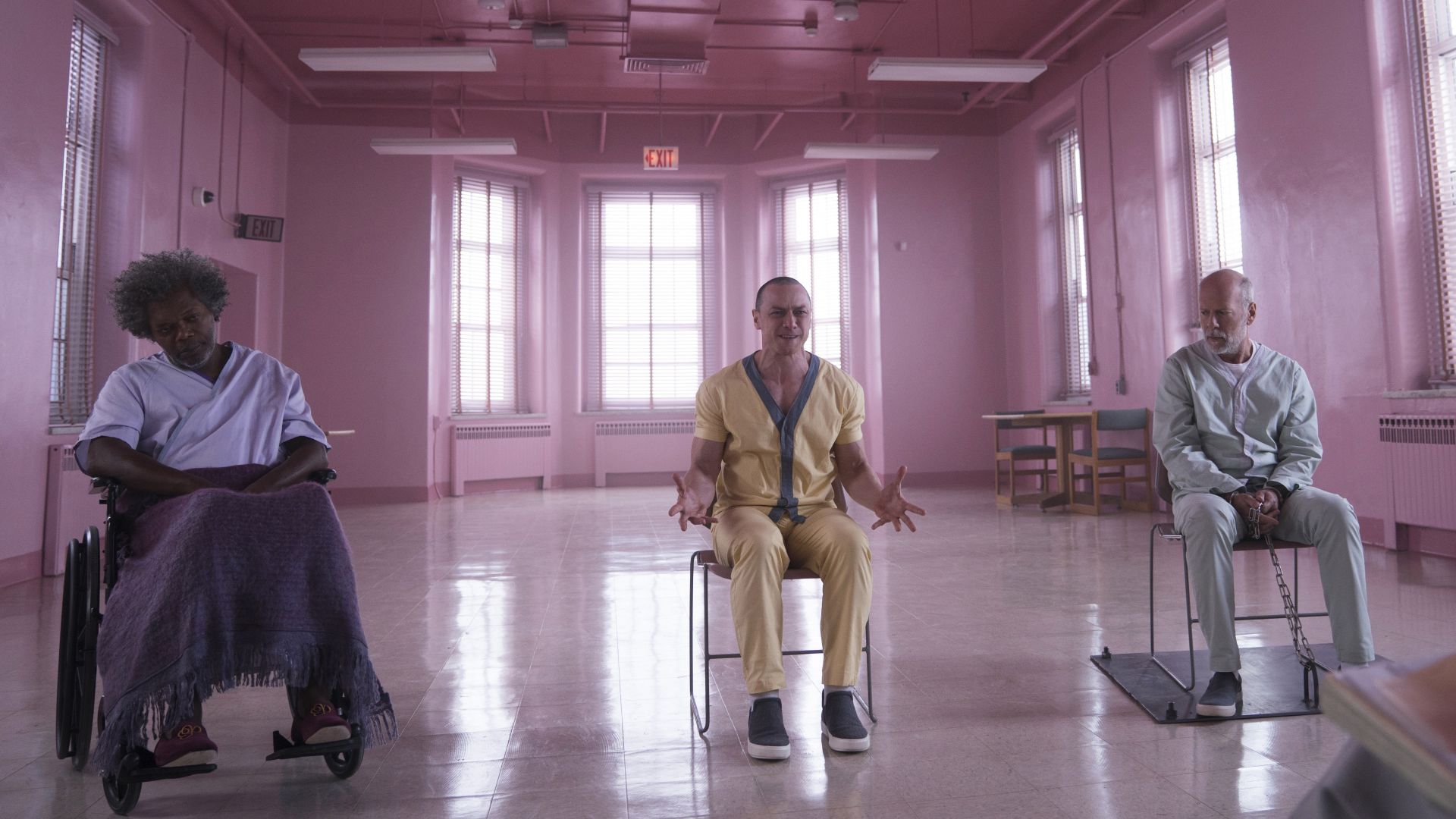 Glass, the latest release from M. Night Shyamalan follows on from Unbreakable and Split, with evil mastermind Elijah Price (Samual L. Jackson) pitting David Dunn (Bruce Willis) against Kevin Crumb (James McAvoy) while they are being studied at a psychiatric facility. Elijah, or Mr. Glass as he likes to be known, has a theory that superheroes exist, that the comic books of the world are an exaggeration from things that have happened in real life. He has spent his life trying to prove this theory through the act of murdering thousands (maybe even, hundreds of thousands) of people and seeing if there are any survivors.

In Unbreakable, he finds his prized survivor, his hero – David Dunn, or as his fans have settled with in Glass – The Overseer. David doesn’t believe in superheroes, even after he is able to achieve feats that are seemingly unachievable by the average Joe. He just knows he is different, and that he can help people. His son however, who is the average Joe or Joseph to be particular, loves the idea that his father is immortal. Being 19 years apart, Joseph is able to be played by Spencer Treat Clark, in both Unbreakable and Glass – as a child and as an adult, which is pretty cool. The finale of Unbreakable is extremely unexciting. Dunn enters Elijah’s comic book store to find out that Elijah is responsible for a multitude of incidents causing mass deaths. He walks away for a written conclusion to pop up on the screen. It is bitterly disappointing. Having said that, the tension on Unbreakable is great, M. Night Shyamalan is a master offering up intelligent films with unforeseen, even unthinkable twists.

Split sets the stage for Kevin (James McAvoy), with David Dunn only appearing for a moment, and Elijah not at all. It’s Kevin’s multiple personalities, whom all act in preparation for the arrival of The Beast, Kevin’s darkest, and most ravenous personality – one who also possesses super strength. The Beast arrives to greet – or maim – the girls that the other personalities had previously kidnapped. Among them is Casey Cooke (Anya Taylor-Joy), whom the beast manages to identify with, realising that she suffers from the same pain that Kevin does and ultimately, after a lot of running and wall crawling, lets her go. Split was a great film, full of tension, and a great performance from James McAvoy. He was able to breeze through characters at will and it was amazing to watch. The character of Kevin was conceived while Shyamalan was writing the script of Unbreakable but opted to not include him, as he could not make it work inside the limits of one movie. So Unbreakable was made, 16 years later came Split and it all set the scene, 19 years on, for Glass.

Unfortunately, before Glass started, I was forced to sit through a stupid as hell Vodafone commercial trying to convince me that Steve Smith was gutsy, talking about making up for his misdeeds. If he was gutsy, he would’ve stood up to Warner’s plan to begin with and now Australian Cricket s doomed. Good one Steve, like that will ever make me sign up to Vodafone. After the ad there were a few trailers and then the lights dimmed. I was excited.

The film opens with a save from The Overseer. Dunn now has his own security business with his son, Joseph, and together they investigate crimes and hunt criminals, all the while selling top notch security products to the everyday consumer. Not long after the opening scenes, David Dunn and Kevin Crumb find themselves locked up at a psychiatric facility. They’re now patients of Dr. Ellie Staple, played by Sarah Paulson, and she has three days to try and convince the both of them that they are not superheroes, despite their delusions. The interviews that she conducts are tedious at best. We, as the viewer, already know the truth and it’s frustrating listening to Dr. Staple trying to convince Dunn and Crumb otherwise.

The fact that she specialises in a disorder where people think they are superheroes sounds odd, and again, it is frustrating to listen to. Why try to plainly convince people they’re something they’re not, attempting to explain away their feats and abilities? Why not just hand Dunn a metal bar to bend and prove that he has superhuman strength?

Elijah is also part of the study. But his genius is so great that he is doped out of his head all of the time so unfortunately, Samuel L Jackson is an afterthought for the first half of the film. But nevertheless, Elijah eventually begins to make his presence known and he is a very welcome addition. His onset really starts to get the ball rolling and his grand plans become known shortly after.

Once again, James McAvoy breezes through his characters personalities at will and it is a great performance, the skill it must take to memorize the order in which he needs to use characters must be awesome. Willis, Jackson and Paulson are all adequate in their roles but neither are in the same league as McAvoy is in this film.

Glass showcases Shyamlan’s skills as a director well, and I found it a joy to watch. His use of slow motion was very effective and it complimented the film. Again, Shyamalan uses twist after twist to keep the film stimulating and as usual, they’re as intelligent and surprising as the next, but, by no means are all of them enjoyable. In fact I think in the future, M. Night Shyamalan’s trilogy will be known as the ‘Chubby Checker’ of films there’s that many twists. In conclusion, Glass is a competent thriller and while the film itself is not great, it is a good close to the trilogy. Or the beginning of another – I guess we’ll see.