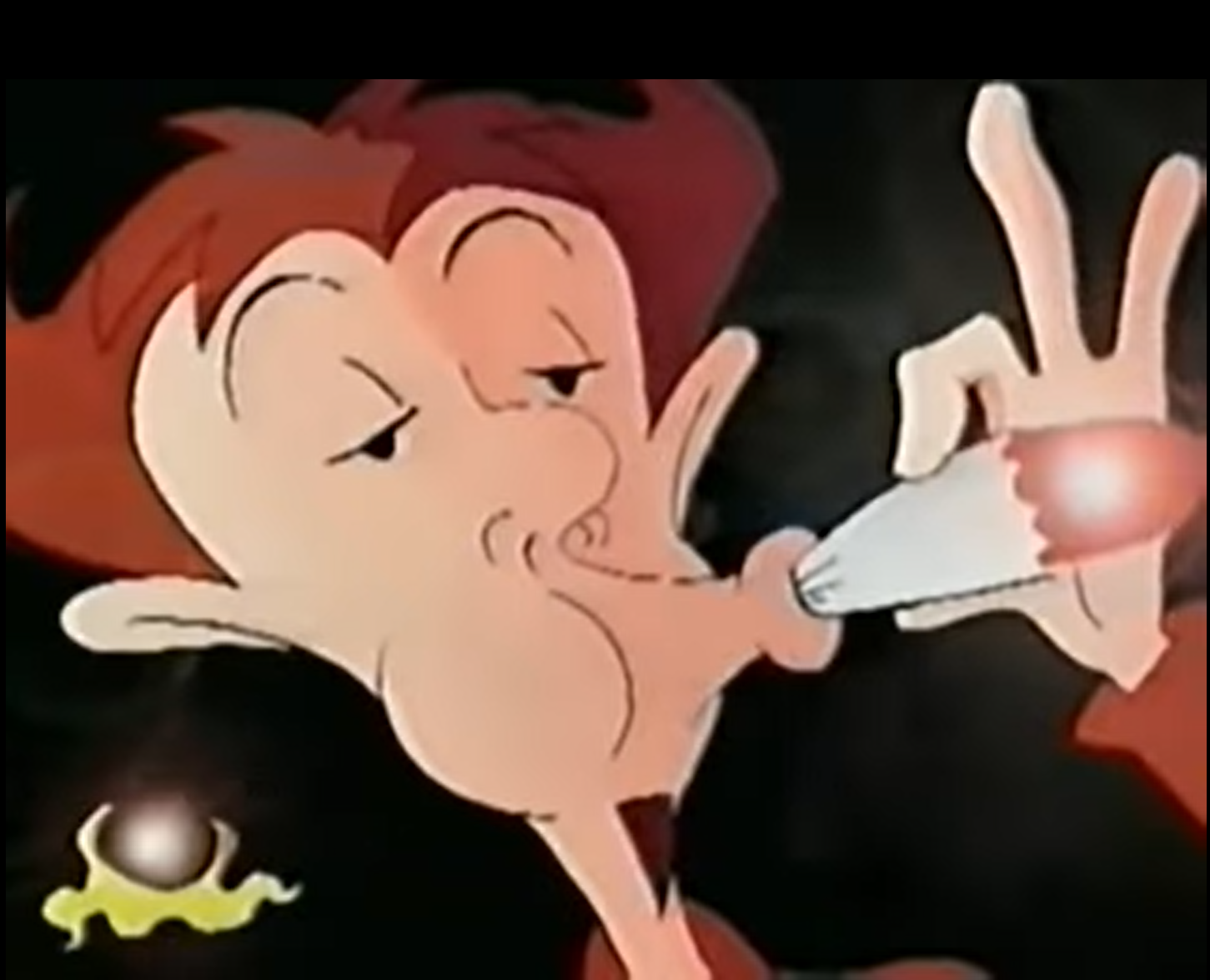 In the nineties, if you wanted your fill of underground entertainment, then you’d slip on SBS on a late Saturday night. Amidst the wealth of bizarre and bonkers short films on Eat Carpet, you’d find a smattering of foreign language sex focused films, and maybe the occasional odd indie Aussie flick, chanced upon the channel through SBS’s support for low budget, indie films. The manner that SBS managed to introduce audiences, young and old, to fringe-fare is akin to the way that the Z Channel in America brought the world of underground entertainment to the masses. If you were game, you’d make a night of watching batshit crazy arthouse films, with drugs or alcohol helping you along the way, allowing you to slide into a morning hangover with the sounds of Rage in the background.

Nothing epitomises the height of the era of out-there SBS films than Ray Nowland’s drug-friendly animated film, Go to Hell!!. Seemingly lost to time like many of the late night Aussie films (short and otherwise) of the era, Go to Hell!! can be found on YouTube in an appropriately shaky and stilted presentation, one that’s been co-opted by the vaporwave movement, transforming a VHS aesthetic into a cool and chill visual style.

Playing out like a conversation between two stoner’s rambling together, engaging in a circular game of ‘yes, and…’ with religion and politics, Go to Hell!! tells the heightened story of G.D., a misogynistic brute of a man who lives on a capitalistic planet somewhere in the galaxy. Recognising that his world is nearing ultimate destruction, he enlists the help of a bunch of wealthy blokes to create a spaceship so he can head off into space to see if they can exist out there. Taking his son, a Ginger Meggs style character called Red due to his flaming red hair, along with him, he eventually discovers a dinosaur inhabited planet, and sets about making it home.

Go to Hell!! opens with a frenetic sex scene betwen G.D. and his mistress, with Nowland’s expressive animation evoking the films of Ralph Bakshi, replete with crude nudity, bouncing bosoms and floppingly flacid willies. It’s juvenile, it’s utterly misogynistic, and if you were to take Go to Hell!! on face value in those opening moments, you’d think that it was proud of it too. But as the film progresses, through increasingly blasphemous plot point after increasingly blasphemous plot point, where G.D.’s son becomes Satan, and G.D. cements himself as a tyrannical God in the sky, it becomes clear that this Nowland considers this a left leaning affair, embracing a world view that encourages equality, climate change action, and common civility.

Unfortunately, the comedy-focused misogyny, alongside the scene of Red sexually assaulting a male ape in the hope to create a new species, works against what Nowland considers his ‘core message’. While it’s easy to mark this down as a product of the genre Nowland’s working with, it does make some moments outwardly unpalatable. But, given the speed and enthusiasm that Go to Hell!! rolics along with its actively manic ideas, those moments flit by quickly.

Nowland animated the film himself, with a closing credit statement saying, ‘Entirely Animated and In-Betweened by Ray Nowland’, with production design by Ray and Leaf Nowland, and it’s clear that Ray had an utter joy making this film. Ray had previously worked as an animator on the plentiful Dot and the… films, while also working on Casper and Flintstones shorts and films too, and knowing that it becomes clear that this is where his true passion lay. Voice work by Keith Scott and Helen Knight (on the YouTube version) comes across as weathered and off-kilter as the visuals do, adding to the utterly trippy experience that comes with watching Go to Hell!!

Dialogue is memorable and bonkers, such as this exchange between G.D. and his subjects, where, upon realising that their spaceship is as doomed as the planet they left is, G.D. says ‘your fate is now in my hands’, to which one person responds to his TV screen ‘so is your dick’. Later, when G.D. establishes full blown religion and installs himself as the omnipresent leader, he demands that people donate to the church to ‘keep the bastards poor’, in case they ever decide to rise up against him.

Nowland’s view of religion, specifically Christianity, is furiously nihilistic, with Go to Hell!! embracing a repulsed view of organised religion, showing it as a natural continuation of the cruel tendrils of capitalism. As such, it’s easy to dot point the manner that Nowland plots the narrative that capitalism is an inherent aspect of the world (or, as in this case, universe) we live in, and as such, God himself is peak capitalism. Equally so, it’s pointed that the God referred to here is a man, given how the women in the film are either sex objects or housewives. In some ways, it feels like Nowland is suggesting that a woman would never make the demands that a male God does, implementing the harsh structure of Christianity, and effectively forcing women to stay as objects, not actual people. As if they’re saying that religion exists to only help the men of the world.

But, while some aspects of Go to Hell!! are clearly well thought out, there are countless more that just… happen. As mentioned, the narrative moves at a frenetic, breakneck pace, injecting high-concept science-fiction aspects that may or may not be pulled from some kind of reality. At one point, the inhabitants of the giant spaceship are seen recycling trash to get credits to buy food, and in a bleakly comedic moment, their grandfather dies, leading them to recycle his body, win a jackpot, at which point they’re offered the chance to bet it all to double it. And, of course, they lose it all. Gotta ‘keep the bastards poor’. That scene takes place in a flash, but leaves a mark.

Go to Hell!! closes with the society transforming Red delivering an actively socialist monologue, replete with stock footage of a devastated and destroyed world playing underneath it to highlight his point. This is Go to Hell!!’s The Great Dictator moment, playing like the reason Nowland made the film in the first place, but presented as if they felt they might have gone too far so better slip this in to brush all the extreme aspects away. But then Nowland wraps up the film with closing credits of Red pissing in a toilet while a calming piano plays in the background. It’s laugh inducing and cringeworthy all at the same time, as if Nowland’s mocking us all.

And you know what, at the end of it all, it’s ok if Nowland is mocking us. This is a film that joyfully stretches absurdity to the max, delivering a scene of Hitler having a conversation with God, having them arguing with each other about each other’s actions, and then also having a scene of Jesus on a surfboard. Nowland’s version of God is as a horrible human who leaves his people to destroy themselves under no guidance and shoddy ‘Commandments’ that do little to encourage civility. At its close, Heaven is a destroyed spaceship with endless failed experiments running amok, with banal carnage existing amongst the premium seats set up for the apocalypse. To use an utterly nineties term, it’s totally far out dude.

Much of what is being explored here is commonplace anger against authority and religion, with a tip of the hat to the Church of Satan here, and a nod to socialism as a whole there, but there’s no denying that watching Go to Hell!! in the era of Elon Musk feels horrifyingly prophetic. Here, God is a Wall Street Banker, and Satan is the person on the street, the ultimate representation of humanity. Or, if you want to look at it another way, God is the shitty project manager who shirks his responsibility, leaving the group project to struggle and flounder, then returning to berate everyone for not following his vision close enough.

Go to Hell!! is one of the most unique and fascinating Australian films out there. Watching it now you’re immediately taken back to the late night vibes of SBS, reliving a specific type of culture that lived in Australia for a brief moment, yet made a huge impact on Australian society as a whole. Ray Nowland didn’t direct anything else after this, making this their sole feature film, and that in itself is a slightly sad notion. A filmography of this kind of off-the-wall animation, pulled straight from the mind in a grotesque fashion, would be something to celebrate. As it is, Go to Hell!! celebrates the enduring power of myth and mythology and the storytellers who bring those myths to life, while equally condemning their presence on our world. If your interest in underground entertainment skews in this direction, then you owe it to yourself to embrace this trippy adventure through space, religion, capitalism, and time.