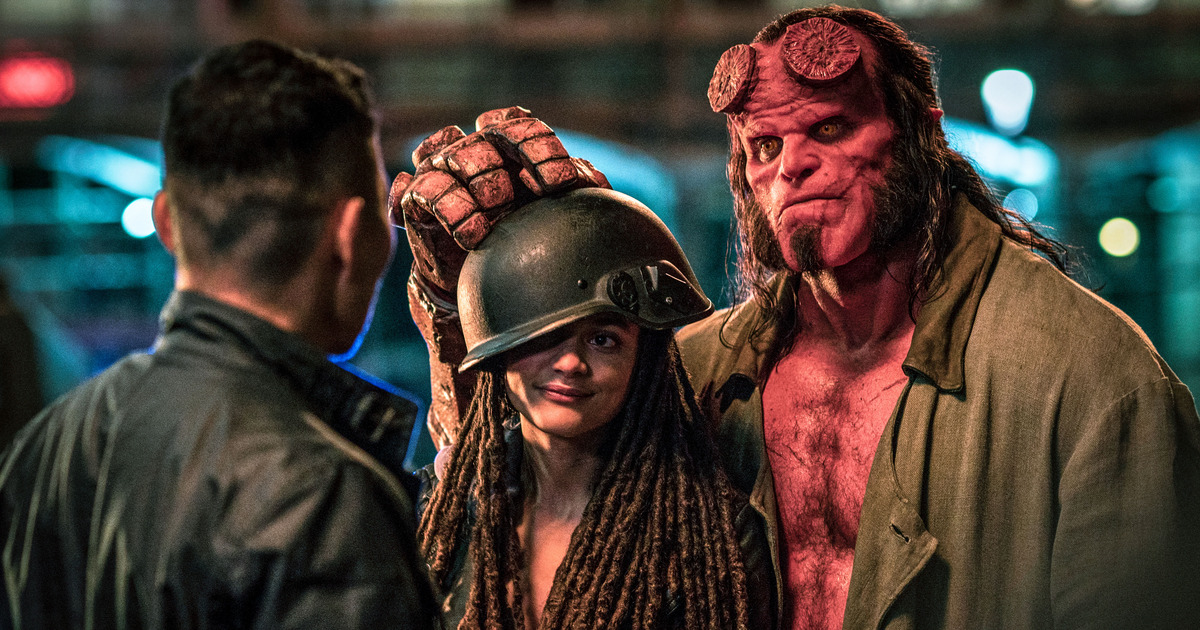 Hellboy Review – A Dud Reboot That Should Have Stayed Buried

As much as I shouldn’t be, I’m comparing Neil Marshall’s Hellboy to the Guillermo Del Toro efforts of the mid 2000’s. I just can’t help myself. What Del Toro did with those films was create a wonderful universe with interesting and rousing characters. Ron Perlman was great in the role; he delivered his lines perfectly and gave the character a big heart. John Hurt was perfect as Professor Broom – he loved his adopted son Hellboy from the get-go and his performance showed that. The list goes on – Rupert Evans, Doug Jones, Selma Blair – they all performed admirably. Del Toro delivered a film that you could just watch and enjoy, and he did just as well with the sequel. Also, not since I stopped reading the Phantom comic strips in the Sunday newspaper every week in the year 2000 have I read a comic book, so can’t compare it to the source material.

In saying the above, I believe there are no words that can truly explain Neil Marshall’s (Dog Soldiers, The Descent) adaptation of Hellboy as written by Andrew Cosby. This “reboot” was completely and utterly pointless – being as B-grade as it gets (and not in a good way). In an alternate reality, a great Hellboy remake would have been released, and this film would be the Asylum rip off – The Adventures of Demon-Man and Leopard-Lad. We all enjoy those Asylum films at times, the unbelievable acting, the dodgy CG, the ridiculous gore and the excruciatingly bad editing. Except here it’s just a big ol’ Hollywood production.

Sure, I did enjoy one aspect of the film – the ridiculously gory action. I honestly haven’t seen anything like that in the cinema, and that element alone was kind of fun. But I won’t be doing it again. I’m perfectly happy to watch the (Neil Marshall) Hellboy’s and Drive Angry’s of the world at home in my living room for a couple of bucks on my PS4. Not the $15+ I paid at the cinema. While these films can be entertaining, they often have zero substance. That’s the other issue with this film – they’ve ‘rebooted’ a series (Del Toro’s Hellboy) that was quite rich in heart, substance and style and haven’t added any of that here. What is the point of rebooting a series it if you have nothing new to offer?

David Harbour was possibly the perfect choice for Hellboy (after all, who can truly take over from Ron Perlman?), but is seriously let down by the script. Cosby’s screenplay is all over the place, full of terrible jokes and bad speeches, both of which are let down even further by atrocious editing. Ian McShane as Broom is completely wasted – his gravelly voice was too much either way, not a shred of compassion or love towards Hellboy until his very end – unlike John Hurt’s Professor Broom, who was able to show care and affection for Hellboy easily, which helped to not only create a bond between Broom and Hellboy, but the audience and both of those characters. Marshall not only missed the hoop, he completely missed the backboard here.

Daniel Dae Kim is another wasted talent here. I’ve always enjoyed his performances, even in cinematic duds like 2005’s The Cave but here he just seems disinterested in what’s going on. His Leopard alter ego was also terribly underused. I liked Sasha Lane as Alice, but again, as with the rest of the cast, she was horribly let down by the script. The films antagonist Nimue aka The Blood Queen, as played by Milla Jovovich, and her sidekick Gruagach (Stephen Graham) are also two of the worst bad guys I’ve ever seen. Jovovich’s Nimue is a complete bore and Graham’s CG half-pig/half-man character (while entertaining at times) looked terrible. Give me Karl Roden’s Rasputin from del Toro’s first Hellboy anytime.

On top of all of this, Hellboy also features the grossest kiss ever put to film. Ever.

Once Upon a Time in… Hollywood Review – This Might Just be the Coolest Film of 2019, and That is Not Okay.

On one hand, if you are a big fan of R rated b-grade gory action films, you may possibly get a kick out of Hellboy – but I offer no guarantees. On the other hand, if you are not the specific target market I just mentioned, steer clear.