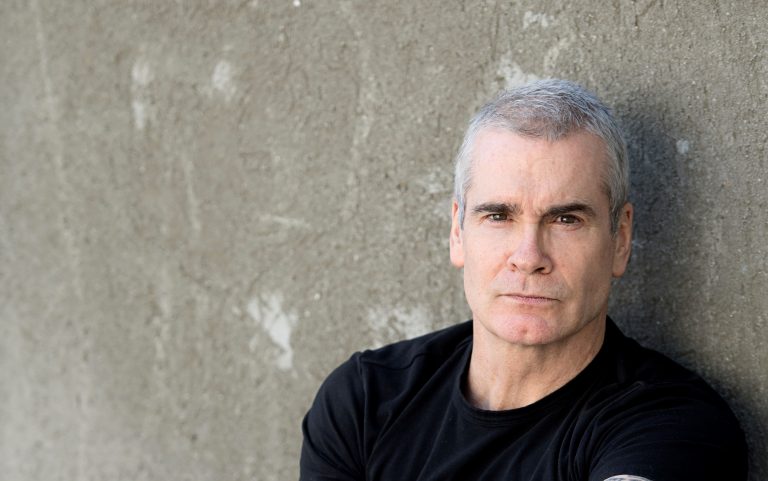 Disclaimer: Sadly, I haven’t had the time to publish this interview which has been sitting in my inbox for a couple of weeks now. If I had, you would have read it before Trump’s failed impeachment, and gone on to think, “wow, that Rollins dude knows what’s up”. But now, you’ll read it and think, “wow, Travis is such a lazy writer, getting interviews up two weeks later”. All I can say to that is, fair call – but here it is regardless.

There are not many people that I can say I respect; despite the fact I haven’t met them. Andrew Peirce of The Curb is one. Leadership expert Simon Sinek is another. Another one is Singer, Actor, Writer and Spoken Word artist Henry Rollins.

So, in a rush one night, after watching one of his spoken word shows in Melbourne from years back, I quickly went to his websites contact details and requested an interview. I was fortunate to have that request granted.

Once the lead singer of punk band Black Flag, Rollins, is also a traveller. You only need to browse the thousands of clips of him on YouTube to see and hear him speaking about his travels, discovering new cultures, and offering up stories that have humbled him. His spoken word tours are filled with opinions and views that are all hastily told with a seemingly aggressive attitude, but when you truly listen, you hear the words of a kind, caring, compassionate, and down to earth human being. Someone who loves to learn every step of the way.

Given my own anger at Australian politics, I decided to get his views on them, if any. On Trumps impeachment as mentioned above and a few other bits and pieces. Read Below:

What is it that people, that don’t live in Australia, think about our nation’s leaders?

I can’t speak to what anyone besides myself know but I’d be willing to bet over 95% of US citizens don’t know the PM’s name or political posture.

Do you know who they are?

I know that the PM is Scott Morrison and that he’s not popular in some parts.

Is our prime minister publicized overseas in the way that Donald Trump is?

The USA is obsessed with itself. Australia gets some airtime because of the fires.

What do you see of our politicians?

Little to nothing, especially these days.

What sort of leadership do you expect a President, or a Prime Minister to show – especially in a crisis where they cannot be of any real help?

They should show concern and most importantly, use the power of their office to move money, manpower and other resources and show that they are on the case. That’s their job.

What sort of societal issues in Australia do you know of, or do you see ?

What I’m aware of was the long process of establishing marriage equality and the money that had to be spent on that, the reality and lack of action/concern on climate change.

Donald Trump was recently impeached (trial ongoing), what is the process if he is to be relieved of his duty as President?

In order for him to be removed from office, a lot of senators from his party would have to vote for his removal. I’m about 100% that won’t happen. Those who want to see Trump gone will have to do it at the ballot box in November but he’s not getting kicked out of office. I think he could very well win the next election. I would be more surprised if he lost

are your thoughts on Donald Trump?

He’s what you get when you under educate, underpay, overwork and disinform the electorate. Nothing he does is of any surprise to me. In the United States, we’ve been watching him for years. A lot of people think he’s great. If he loses the next election, there will be some very angry and well-armed people in the streets. It might not end well. Even if Trump loses, a great deal of damage has been done that will take decades to neutralize. In my lifetime, he will be the most transformational US president.

The last time I saw that you were in Australia, you were hanging out with Briggs, how did that all come about, and what was you experience with Briggs like?

It was great meeting Mr. Briggs. He’s a very talented, smart and funny man. He comes to Los Angeles now and then and has been over to the house, where he’s always welcome.

You’ve been to Australia several times that I have noticed, what is your favourite thing about the land down under?

The people at my shows and the music scene. Both are amazing.

Travelling or seeing other cultures is paramount to understanding people (In my opinion), what do you recommend for people that simply can’t afford to travel?

You can try to travel in your own country and learn a lot. I think an Australian could learn quite a bit about the human state and not have to leave the country. Same thing in the United States. Otherwise, I do think you miss a lot as to what makes humans tick. We’re a complex species. Hard to like all the time but also hard to hate.

You are a traveller, you promote travelling in your spoken word tours (in all the ones I have watched at least), what is it that gave you the travel bug?

My mother took me here and there all over when I was young. Also, being in a band had me living outside of the USA for months at a time.

What’s the best advice you could give to people in general?

As hard as it can so often be, you must try to be kind to others. It’s a heavy lift but humans are fragile, and the human psyche is easy to injure.

When will you be making a movie in Australia?

I have no plans for that.

Have you shot in Australia before?

Yes, but not in an acting capacity.

Would you like to shoot a movie in Australia? If so, what’s be your ideal location for the shoot?

When it comes to films, I take my orders. I’d be happy to shoot in Australia. It would be interesting to spend some time in the centre of the country as I’ve not been there.

So that’s Rollins take. To get more – click here to watch Part 1 of ‘Henry Rollins: Provoked at Melbourne’ on YouTube. Parts 2 and 3 are also readily available.