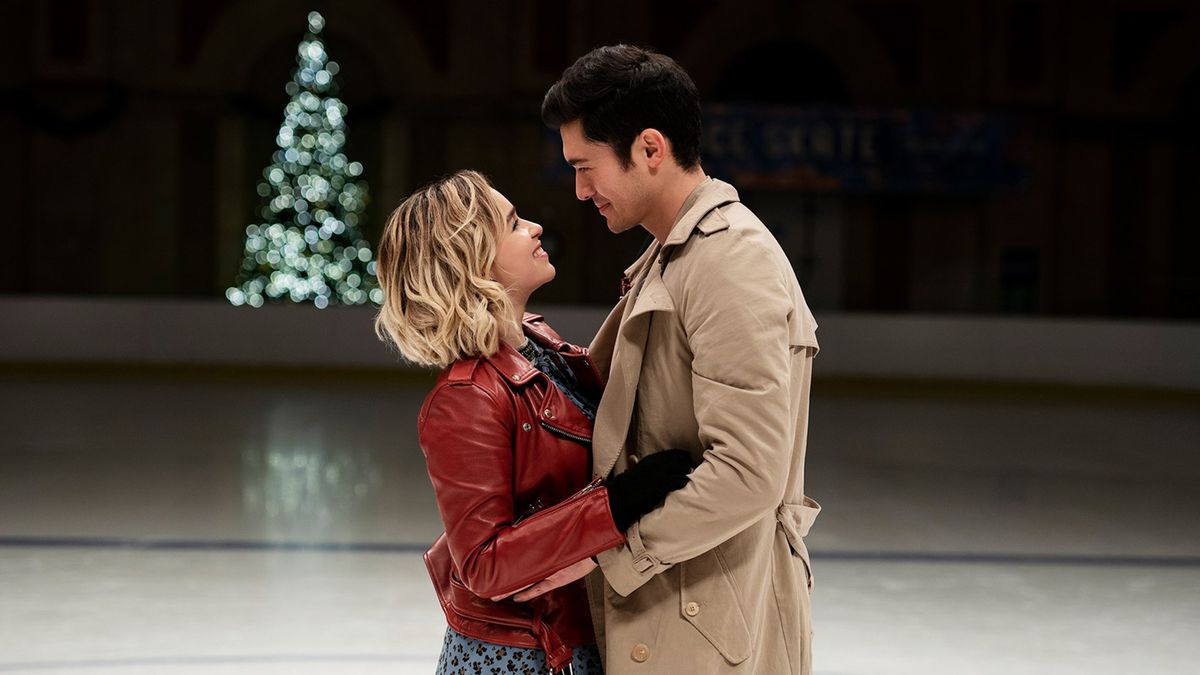 Directed by Paul Feig, Last Christmas stars Emilia Clarke as Kate, a young woman in London burning the candle at both ends and struggling every step of the way. Her life starts to turn around when she meets Tom (Henry Golding), an effortlessly charming man whose charm and care being to change Kate’s life for the better, especially around the pressure of Christmas time.

There, I said it. I shall now bury myself alive to avoid facing harsh criticism for my opinions. Or not because it’s fine. I get turned off by virtually every Christmas movie preaching so hard the ideas of family and love and the beauty of this wonderous time. I get it, but I just do not care. Most of these movies lack any the craft to make any of their themes meaningful beyond the thinnest of a surface level, which is why I only like five Christmas movies (and three of them barely count in the genre), and they are:

With Last Christmas being directed by a bland filmmaker like Paul Feig, and the marketing suggesting this one is more for Love, Actually fans, it had some heavy lifting to do for me, not just to get over my dislike of Christmas movies. For me, the movie buckled and broke under such weight, and mostly because it tries to do too much, stopping it from becoming a decent comedy.

There is so much here, from Emilia Clarke playing a hopeless and unsuccessful version of her real self, the Christmas in London setting, George Michael’s music being everywhere (which never has any plot relevance despite it being the main story influence), Henry Golding playing a character you could easily guess the point of by the trailer, Michelle Yeoh as a shopkeep who calls herself Santa, Emma Thompson as Kate’s Yugoslavian refugee mother, a lesbian sister, Brexit, comments on homelessness, the magic of Christmas (barf), a cameo from Andrew Ridgeley, and the lyrics of the song “Last Christmas” taking literal form in the song in a way I hope wasn’t intentional and just a coincidence.

Does any of it coalesce into a complete and moving narrative? Nope.

Clarke and Golding work really well together, because look at them. With one look, they bleed chemistry out of every pore because both are ineffably charismatic and charming, both convey flaws of their characters minutia without relying on some rather basic dialogue. Put them in any other movie with any other roles and they would still be magnetic together. I had no problems whatsoever with these two leads, and in fact I would say that Clarke naturally fits into this kind of movie.

Everything around these two struggles to make sense and it just annoyed me for all 103 minutes. I will say that I think Bridesmaids and The Heat are decent comedies that did a lot for the genres representation of ‘funny women’, but I don’t think I like Paul Feig as a director. He always shoots in bland and basic fashions, never an ounce of artistic flourish or even some striking colours beyond what you can get on a street or in a standard studio.

What you do hope for is some great comedy to liven things up, but once again the jokes are more like what I call “jump jokes”. It’s like “jump scares”, which are quick and sudden ways to get that shock reaction from an audience, here it’s making you burst with a bit of laughter and then immediately you stop laughing and if you think on what you were just laughing at, it ceases to be funny. This is cheap and easy comedy and it is his go-to technique for all his films and I’m more than sick of it.

What really doesn’t help the lack of humour in the movie is that this is a particularly bad story you have definitely seen before, and it brings nothing new to the format. When I listed all that stuff that’s in this one movie, you have to understand that all of those elements are just there, plain and matter-of-fact, without any real merit and feeling like they were the easiest thing to do. If you want Emilia Clarke to give a great performance in a romantic-comedy, write a character just like her. If you want some half-hearted attempt at making all this current and deep, have the main characters be of different ethnicities and throw in a few scenes paying lip-service to Brexit, as if that modernity was the only way this script could be made. And still, have no real reason for George Michael’s music to be such a heavy influence beyond “well he was great wasn’t he?”. Yes, I know he was, but what’s the real point or purpose? Nostalgia? Coincidental titles? I have no idea, and I don’t think the filmmakers did either.

Now what I’m going to do next is talk about a major twist in Last Christmas that if you haven’t guessed from the trailer, this is a spoiler for those still interested.

So Golding’s Tom is really a dead person that Kate is imagining as a form of subconscious self-repair in her times of desperation. It’s a bluntly obvious twist from the fact that Tom isn’t seen with anyone else in the trailer besides Kate, and it’s made even worse when you read the lyrics for the song “Last Christmas”. “I gave you my heart” just makes me laugh in how unsubtle the reference is, seeing as Kate needed a heart transplant a few years ago and the heart she got was really Tom’s heart as he was killed by being hit by a bus. None of this makes any medical sense, and flat refuse to accept some cop-out answer of “the magic of Christmas” or “the power of love” because I am sick of that. It’s lazy, over-done and completely pointless. If Tom had been real, then I could fully accept Kate’s journey. Instead it’s a half-baked metaphor from clueless filmmakers just trying to cash in on easy-to-please Christmas-time audiences.

If it wasn’t made abundantly clear by now, I did not like Last Christmas. It swerves into every genre peril that screenwriting classes would teach to either avoid completely or form into your own voice. This movie does neither and ends up in a saccharine, false, and strong-as-tissue-paper result that bored me, confused me, made me smile only a handful of fleeting times, and just generally annoyed me at the stupidity. Come for Emilia Clarke and Henry Golding remaining as two of the most enjoyable actors today, avoid everything else about Last Christmas.