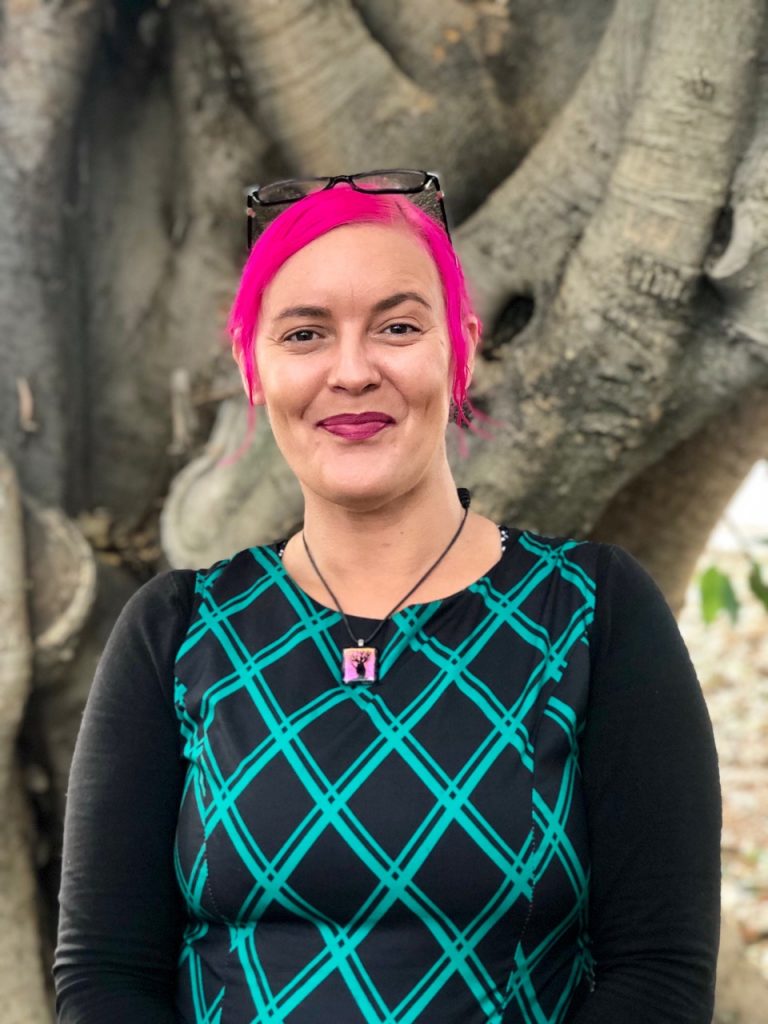 After more than a decade producing, writing, directing and casting a myriad of Australian films, documentaries, web series and television series, pink-haired-punk-rock-Indigenous-Western-Australian producer, Taryne Laffar AKA Pinky has today officially launched her own production company PiNK PEPPER at pinkpepper.com.au.


PiNK PEPPER will specialise in the development and production of Indigenous and diverse content, and its debut project, Our Law, the 27-minute documentary which has been making headlines across the country, premieres tonight, Monday 22 June on Karla Grants Presents on NITV at 8.30pm.

Taryne descends from the Bardi and Jabbir Jabbir nations in Western Australia and PiNK PEPPER’s mission is to create exceptional Indigenous-Australian film and television. PiNK PEPPER is dedicated to working with Indigenous storytellers and creatives to produce a dynamic slate of Indigenous-led screen content across documentary and drama for Australia and the world. Taryne has been developing an exciting new slate and has already attracted development funding for a number of factual and scripted projects.

OUR LAW: The Series – Pink Pepper and Periscope Pictures

Taryne descends from the Bardi and Jabbir Jabbir nations in Western Australia and PiNK PEPPER’s mission is to create exceptional Indigenous-Australian film and television. PiNK PEPPER is dedicated to working with Indigenous storytellers and creatives to produce a dynamic slate of Indigenous-led screen content across documentary and drama for Australia and the world. Taryne has been developing an exciting new slate and has already attracted development funding for a number of factual and scripted projects.

OUR LAW: The Series – Pink Pepper and Periscope Pictures

Hot on the heels of attracting national media attention and being a Finalist for Best Australian Documentary at the 2020 Sydney Film Festival, Our Law has secured development investment from Screen Australia for a full 6-part documentary series. Our Law follows Noongar police officers, Senior Sergeant Revis Ryder and Sergeant Wendy Kelly, as they police one of the most remote beats in the world, Warakurna – home to an Indigenous community still practicing the lore of one of the world’s oldest living cultures. Our Law: The Series will cover the state of Western Australia and completely open up the conversation, as well as our understanding of Indigenous Police Officers and the Indigenous communities and peoples that they police.

Old Mate is a comedy web series co-created by and starring acclaimed actor, Clarence Ryan (KGB, Stateless, Wrong Kind of Black) about a 47,000-year-old Indigenous Australian superhero played by Clarence. The series will show audiences a glimpse at modern Australia through the eyes of the nation’s oldest man, who has literally seen it all. Joining Taryne and Clarence is Executive Producer, Lauren Elliott, co-creator Renato Fabretti and Writer / Script Coordinator, Clare Toonen. The team are currently developing the series with development investment from Screenwest.

Since meeting Taryne in 2018, I’ve been consistently impressed with her drive, passion and tenacity. She’s one of a kind and we’re so lucky to have her here in the Western Australian film industry. It was a pleasure producing KGB together last year, and I’m so glad Pink Pepper and Galactic Baby have teamed up to develop Old Mate.

Red is an 8-part scripted anthology series Taryne is developing alongside Broome-based producer, Jodie Bell and eight Western Australian Indigenous female writer/directors. Red will follow the innovative format developed by New Zealand producers Kerry Warkia and Kiel McNaughton with their films Waru and Vai, which successfully launched Maori and Pacific filmmakers internationally. The anthology of eight short films will each explore the impact of ‘missing Indigenous women’ from a Western Australian female Aboriginal perspective and will combine to form an 80-minute feature film.

The opportunity to work with Kerry Warkia and Kiel McNaughton and produce a film of this format is ground-breaking in Western Australia. We are thrilled to tell a compelling story on a subject that until recently has been taboo territory.

Tata Detective is a 6-part TV drama series created by Taryne, which has recently secured development funding from Screen Australia. Taryne will be working with writers Beck Cole and Dot West, Kelly Lefever as Script Consultant and Lois Randall of Magpie Pictures as Co-Producer. Set in Broome, Western Australia, the series follows feisty and gregarious Indigenous-gallery-owner-turned-culture-detective, Muriel Hunter. Muriel uses her wit, charm and influence to take down the underbelly of the arts world in her Kimberley’s homeland and finds herself caught between fighting for justice and protecting her family.

I’m excited to be collaborating with Pink Pepper to co-produce Tata Detective – this highly original project feels like a perfect fit, bringing together the deep experience that Taryne and I share in arts and cultural development, as well as screen production. Pink Pepper is about to make a colourful splash on the Australian screen industry landscape – congratulations and chookas PP!


Taryne’s background and track record in the Western Australian screen industry is as diverse as her development slate. In 2019, she was the Producer’s Attachment on Season 2 of the critically acclaimed ABC drama series, Mystery Road, learning the ropes from Producer Greer Simpkin from Bunya Productions. She was the also the Series Producer of ABC iView Indigenous comedy series, KGB, working alongside Executive Producer, Lauren Elliott from Galactic Baby.

In 2018, Taryne was the recipient of Screenwest’s year-long Spark initiative and in 2019, she was 1 of 16 Australian producers selected for Screen Producers Association (SPA) prestigious Ones to Watch program where she took out the $15,000 SBS First Glance development deal. Also in 2019, she was 1 of 10 producers selected for Screen Australia’s Indigenous Producer Program and was 1 of 11 creatives chosen for Screen Australia’s Developing the Developer. In 2020, she was handpicked by Screen Australia to co-facilitate the No Ordinary Black Indigenous short film initiative, alongside Charlotte Seymour (Other People’s Problems).

It’s been a privilege to have supported Taryne’s successful career, especially through such impactful initiatives as the Screenwest Spark Initiative, which has propelled her onto her current innovative successful trajectory. Taryne continuously pushes the boundaries within her slate of projects, resulting in impactful, thought-provoking, strong Indigenous-led stories. Taryne’s dedication, think-outside-the-box business approach and unwavering passion shines through every project she produces. I’m more than proud of what Taryne has achieved thus far in her career, and I’m excited to see what will be produced by the Pink Pepper team into the future!

As part of PiNK PEPPER’s services, Taryne will also specialise in casting Indigenous and diverse talent, and will also be available as a freelance producer, writer, director, mentor and workshop facilitator.