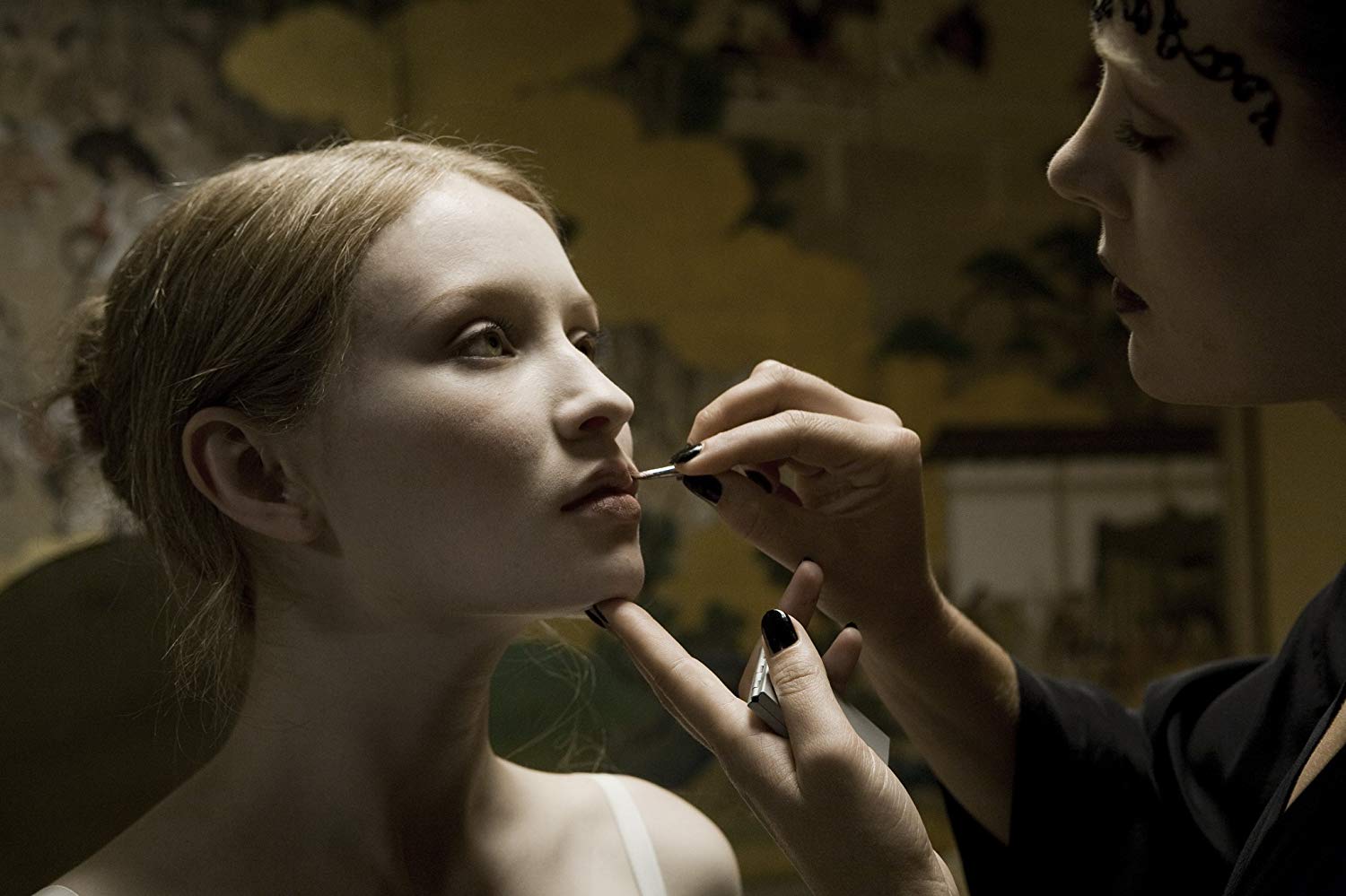 Lucy is a Sydney University student who is short on cash. She works three quotidian jobs and still finds it difficult to come up with the rent for her share house. Ostensibly spurred on by her need for money she answers an advertisement in the student paper which leads her to an exclusive dinner club where women work in revealing lingerie whilst providing silver service to a wealthy and presumably debauched clientele. The organiser of the dinner club, Clara (Rachel Blake) informs Lucy, who is now known as Sara for the functions, that she will never be vaginally penetrated by the clients. Lucy/Sara’s success at the functions leads to her taking on a position as a Sleeping Beauty – essentially a service wherein she is drugged into a deep sleep and left with men who have full use of her body providing they don’t penetrate her or leave any marks on her body.

Lucy is simultaneously complex and a cypher. In an early scene at a bar she allows herself to be the prize in a coin toss between two men who want to sleep with her. Yet for that level of passivity she is also suffused with a sneering resentment of almost all those around her. The exception seems to be her friend Birdmann (Ewen Leslie) a depressed alcoholic and drug addict who helps to evince some of the few genuinely emotional reactions from Lucy.

Emily Browning perfectly imbues Lucy with her contradictions. At the dinner club her beauty is unique. She is small and pale compared to the other women working. In her day-to-day life she is almost unconcerned with her appearance. She is simultaneously fragile and biting, lost and purpose driven. She’s an impossible character to pigeonhole. Her carelessness verges on self-destruction yet she has an aggressive side to her that undermines any reading of Lucy as a little girl lost.

Visually the film is almost painterly in its approach. Annie Beauchamp’s production design is captured beautifully by Geoffrey Simpson’s cinematography, but here too there is a cool distance being visualised. Leigh invites the audience to see everything yet in many ways shows nothing. Even in shockingly intimate moments where clients prod and pull at Lucy’s body, the audience isn’t necessarily made complicit in the acts being perpetrated. Perhaps this is because there is no character to empathise with, no subjectivity that the audience is asked to sympathise with; Leigh never really gives the viewer an “in” which is why the film so often comes off as sterile despite it’s challenging and charged subject matter.

Sleeping Beauty is a demanding film because it gives little away even though it is openly libertine in places. It’s a puzzle that has no solution and even if the audience feels like they have seen everything, or sometimes too much, there is still a sense that underneath the surface exists something else entirely. As tempting as it is to read the film as a critique of the male gaze and the use of women’s bodies in art and cinema, I don’t feel that’s the directorial focus. Leigh does have sympathy for some of the clients who use Clara’s services and one in particular (known only as Man 1 and played by Peter Carroll) is a more fully realised character than others in the film.

Eventually the audience is left with more questions than the film answers and that is refreshing and frustrating. If the film offers a peek behind a taboo façade it soon complicates the act of looking with comprehension of what is being seen. I began the review saying the film is easier to respect than to like, and it’s partially because Leigh doesn’t give the viewer unmitigated access to the psychology surrounding the film that deserves admiration; yet it is also something that keeps the viewer from fully engaging. Nonetheless Sleeping Beauty cannot be faulted for its ambition nor its artistry. Julia Leigh to this date hasn’t directed another film and that is somewhat a shame because her directorial style is admirable especially as this was her first feature.

Writers: Julia Leigh, (based on an idea by Yasunari Kawabata)