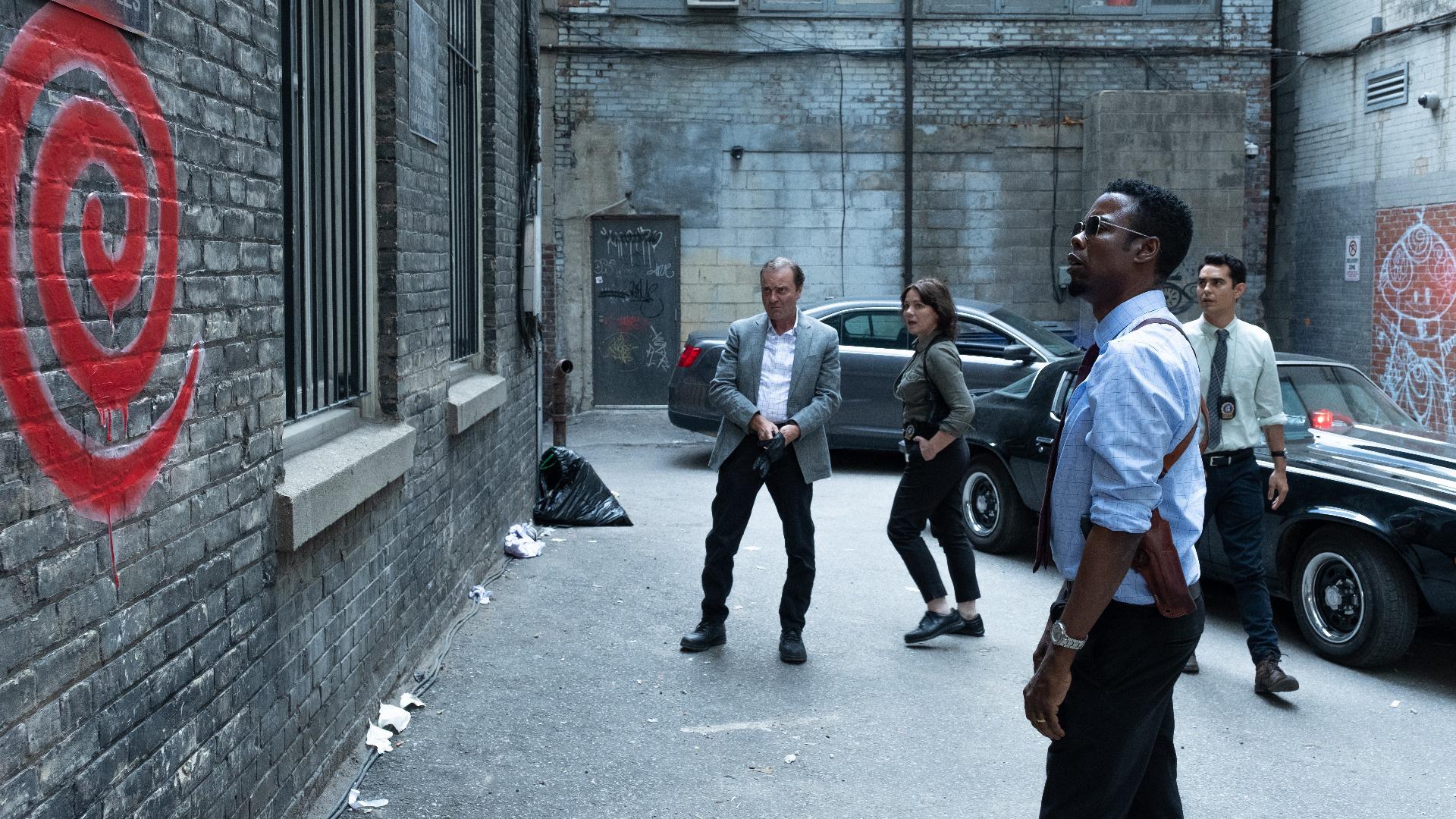 
Just when you thought game-time was over, the Saw-adjacent spinoff, Spiral, possesses all the hallmarks of its ilk, albeit being driven by a desire to defibrillate a series rather than perpetuate its brand of explosive voyeurism.

The film, directed by previous Saw collaborator Darren Lynn Bousman, is on a mission of reinvention; reforming its ways of being a conveyor-belt-of-bloody-demises, each death attempting to out-gross the last, and maturing into an engaging, politically tinged survival-thriller that lands somewhere within SE7EN territory.

In Spiral, a series of calculated (not to mention bloody!) cop killings sets off an unwieldy investigation. Morality lessons disguised as gruesome and life-threatening puzzles promise survival should those subject to them succeed in some form of redemptive mutilation. The nature of these deaths, resembling those of the Jigsaw murders in terms of grit and ingenuity, are handled by Det. Ezekiel “Zeke” Banks (a terrific Chris Rock); a battle-worn though not yet broken vet of the force who has seen his fair share of corruption. Through flashbacks, we learn the extent of this foul play; a feat Banks wants no part in to the point of his professional ostracisation. The ensuing game of cat-and-mouse is spearheaded by an elusive, auto-tuned figure with a penchant for pig masks and distressed Tiffany’s boxes (just don’t expect to find any jewellery in them).

The above said, Spiral remains a Saw film, and so-be-it checks off a series of storytelling requirements not meant for the faint of heart. While the viscera remains, its punctuating depiction avoids shallowness through its effective construction of stakes. Yes, these scenes are overwhelmingly graphic, but, smartly so, move at a pace that avoids lingering discomfort and is depicted in a style that, to some respite, detaches itself from reality.

These moments wrap themselves between an effectively told, though undeniably familiar, narrative. The film’s political undertones, while prevalent, never dive deep into the root of the problem; a clear decision made by the filmmakers not to sully the atmosphere (of which it is impeccably expressed through lurid lighting). Distinguishing itself from similar thriller fare comes through the form of an impressive Rock, who navigates the material with his trademark irreverence. Screenwriters Josh Stolberg and Peter Goldfinger find their perfect candidate in the affable Rock, with his humour and high energy used to denote how law enforcement has chipped away at his final nerve. He is as blistering as he is charming and we may have found our new horror-darling.

For Rock to shine, other characters, as is the nature of the slasher genre, are pushed into the background; serving as lambs to the slaughter. Given the overall product, it is an acceptable compromise. You’ll catch yourself remembering post-watch that Samuel L. Jackson features in this film. He has possibly made the easiest dollar of his career (though some of those Marvel cameos might rival). Alas, Spiral will likely catch a lot of polarising opinion due to the abbreviated manner in which it concludes. The effect turns what is smooth into something crunchy, but with that said: Who doesn’t enjoy themselves some peanut butter? The final moments are high-reaching yet bold in their depiction.

Spiral carries with it a legacy of filmmaking shamed for its brazen application of gore. While not entirely ashamed by its own skin, it is a franchise eager to wriggle itself out of the shackles which keep it tied to being a superficial spit-fire of gruesome murders. This growth feels right, and functions as a natural progression for the series. When you have such an enjoyable romp like this, who wouldn’t want to play again? (Unless you’re squeamish…avoid if you’re squeamish…)