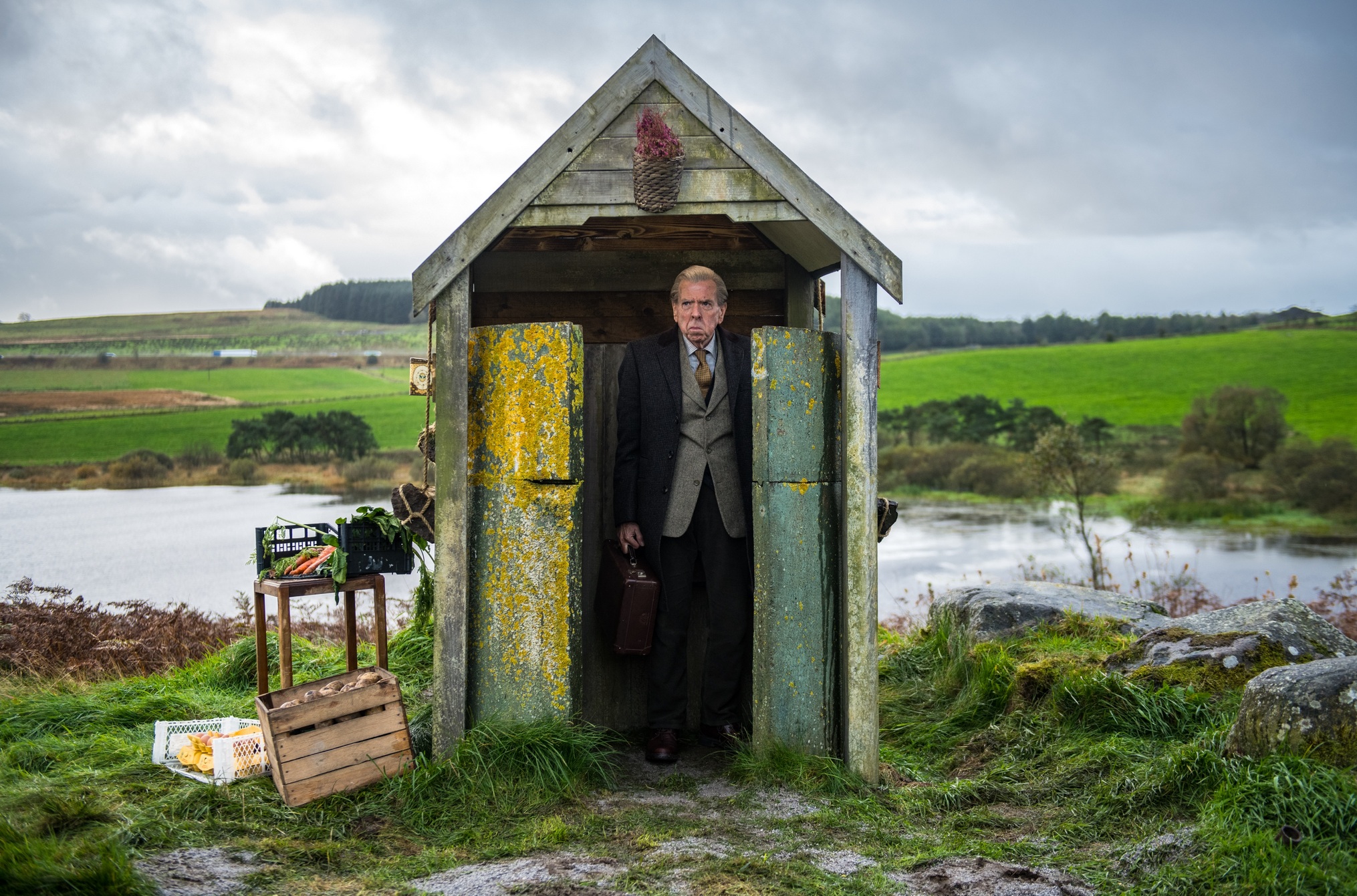 The British Film Festival returns this year with a stacked array of thirty-one fascinating films and marvelous performances. The opening feature is the Australian premiere of The Duke, a hilarious and touching tale based on the real-life case of a taxi driver who stole a portrait of the Duke of Wellington from the National Gallery. Starring Jim Broadbent and Dame Helen Mirren, this is the penultimate feature directed by the underrated Roger Michell, maker of perfect films, who passed away just a few months ago.

Edgar Wright’s keenly anticipated Sixties time-travel horror fantasy Last Night in Soho comes to us with the killer combination of Anya Taylor-Joy and Thomasin McKenzie. Another highlight is Kenneth Branagh’s ode to his birth city, Belfast, starring Dame Judi Dench and Ciarán Hinds, with a Van Morrison soundtrack. Olivia Colman, Josh O’Connor, and our own Odessa Young appear in Mothering Sunday, a film garnering quite a bit of buzz overseas. Benediction, the story of WW1 queer poet Siegfried Sassoon, has been gathering nothing but praise for its sumptuous direction by Terence Davies and performances by stalwart Peter Capaldi and the always interesting Jack Lowden.

The festival will also run a Seventies retrospective, showcasing a 4K restoration of Anthony Burgess and Stanley Kubrick’s A Clockwork Orange. Rounding out the lineup are documentaries and rock concerts and a David Bowie biopic, with a special sneak preview of WW2 drama Operation Mincemeat starring Colin Firth and Matthew McFadyen.

The festival screens entirely in cinemas and will tour the country for almost all of November. There are three Timothy Spall films on the program this year, an abundance which caused Nisha-Anne to fall over a bit in excitement. Two of those films are reviewed below.

The premise of this film is exhilarating, coinciding as it does with lockdown ending here: the sudden wild possibility of travel, freedom of movement after being curtailed for so long. That excitement catches even a recluse like me who hates having to put on proper clothes and venture out of the house. So I was utterly charmed at the start of this, especially since our protagonist is played by an actor so dear to me.

But then the plot devolves into saccharine and contrivance with an increasingly obvious anti-Brexit emphasis that feels quite heavy-handed and without nuance, using people of colour, a Muslim lady, and a Ukrainian family in an almost tokenistic way. I wish those bits were done better but I appreciate the gesture, particularly from filmmakers of a certain generation.

And certainly the film does a very good job of depicting the fraught unease of public transport, where a bunch of people crammed together in a small space are too scared to stop some arsehole bullying some vulnerable person until someone does speak up and in turn emboldens everyone else. That group dynamic is all too recognisable and slightly sickening.

At its core, the very small story of a marriage is fascinating in its own small way. Tom and Mary are the only people in each other’s lives, no other relatives, no friends who pop around or invite them over. They’ve lived for decades in a tiny rural cottage at the northernmost tip of Scotland. There’s a lovely brief montage that illustrates the comfort and claustrophobia of such a life, in the view of the garden from the kitchen window that changes over so many decades.

When Mary passes away, Tom begins an odyssey of bus trips to the southernmost tip of England for reasons that are revealed through his physical and spiritual journey. Joe Ainsworth’s script features a wonderful crisscrossing of time – chiasmus, that’s the word – in an early scene where older Tom totters down a street, and the younger version of him and Mary come walking up the opposite side of the street, the colours all silvery cool and a little bit ethereal.

In fitting with such a lowkey story, the cinematography is not flashy or self-conscious. But director Gillies MacKinnon’s painter eye is apparent in the recurring use of mustard yellow, in a wide angle shot where two groups of people flank our protagonist in the centre, in swirls of white through water, more of that ethereal glow later in the film, and the deep changing blues of Timothy Spall’s eyes.

With Tom, we travel from the bleak grandeur of the Scottish highlands to the rich neon colours of the cities to the windswept winding curves of the English countryside and finally to the bleak beautiful blues of Cornwall. Tom’s memories populate the city and country here and there, glimpsed from the bus window and in old bed-and-breakfasts. I really responded to that narrative technique to show how a city and a country can be pinpointed with so many specific moments, small and big — here’s where I had dinner with that friend; that’s where our group lay on the paving on our way back from that gig; that’s the bus stop where I cried and cried the evening my grandmother died.

The film also doesn’t shy away from the terrible fragility of an old person in unsafe surrounds, whether it’s the helpless panic of being alone in a strange city – so relatable – or carefully stepping down rainwet mossy steps or navigating treacherous rocks with a cane. My sixty-year old aunt has a horror of old(er) people falling, and I could totally hear her in the back of my head: “Nisha! My heart was in my mouth, watching him!” Yes, yes, be quiet and watch the movie.

There’s a very real poignancy to Tom’s emotional wounds, and of course Timothy Spall mines the hell out of that history without any melodrama, being an actor who conveys so much in moments of silence and reflection. As you would expect, he carries the whole film, and is assisted in a few scenes by the most excellent Phyllis Logan – whom you might know as the most beloved Mrs Hughes from Downton Abbey. I could have done with about ten more scenes of Phyllis Logan as the older Mary but maybe that would have turned into a quite different film.

At first, it’s charming to see how this man existing in his own private time collides accidentally with social media that tracks him on his journey. The closing credits are super cute in that respect. But the narrative tone isn’t entirely clear in regards to the juxtaposition of Tom and social media – perhaps it’s supposed to be wholesome? Perhaps it’s supposed to be a wry and unnecessary comment on private moments playing out in public. Perhaps both? There’s an uneasy dark hilarity to the final few scenes in that context which I both liked and disliked. But then the focus returns to Timothy Spall’s performance, and rightly so.

For all the story’s shortcomings, I got quite teary at a small random moment of a stranger sharing their umbrella in the rain. The whole film could have been better, deeper, but the ending was visually beautiful, mildly satisfying, and not surprising in the least.

This would make an interesting double feature with The Starling (2021), being journeys of a very specific kind of grief.

The Obscure Life of The Grand Duke of Corsica

Written and directed by Australian Daniel Graham, this is a film disgusted by the physicality of flesh and sex and bodily processes, and also obviously reveling in that disgust.

Timothy Spall plays Alfred Rott – see what they did there? – a famed architect who is forever bordering on insolence to his arts council/government clients, impatient with pretensions to high culture. He’s a familiar archetype, the outsider whose self-enforced detachment is eroded somewhat when he’s asked to design a mausoleum for the odd Grand Duke of Corsica (Peter Stomare) living on the island of Malta.

Alongside is a storyline about St Francis of Assisi on his journey to sainthood as he struggles with his own obsessive disgust of the physical which in his case manifests as leprosy. The Assisi storyline becomes a film within the Rott story, and then the aftermath of that film becomes its own storyline as a malaria pandemic spreads across the island. It all becomes quite meta but is grounded by the relationship between Rott and the Grand Duke.

Watching Timothy Spall always feels to me like watching Ben Mendelsohn twenty years into the future, and he’s quite Mendo here with the anti-establishment narkiness and the copious swearing and any number of laconic utterances. Which makes even more sense considering this was scripted by an Aussie male. He also spends most of the film in a beautiful indigo blue suit, all lanky and cool and mostly unimpressed with everything he sees.

Peter Stormare seems to be having a lot of fun with a delightfully strange performance, a sort of Malkovich without the silky menace, more like a silky cuddle bear. There aren’t as many scenes of Rott and the Duke together as I expected; the film gets a little distracted with wrapping Rott up in the metaphysics of Assisi, and with the malaria outbreak. But there are at least two scenes where the friendship shines in tenderness, thanks to the sincerity of Spall and Stormare. The reveal of the mausoleum is a particular highlight, the perfect illustration of the Assisi quote central to the film.

Unsurprisingly, for a story about male friendship, the few female roles function only to serve the male egos and the plot. But then I didn’t expect any different.

There’s a lot of absurdism which does feel puerile at the start but then dissipates to a degree. The cinematography is oddly over-blurred in the background of some shots, but has a lovely palette of rich deep blues and old golds, nicely complemented by a score of delicacy and restraint.

I felt quite ambivalent about the pandemic setting which seemed both uncomfortably real and also quaint somehow – there are gas masks and the phrase “virulent strain” and people dying in sudden horrible respiratory distress. And yet those scenes feel almost cliched and stylistic, not nearly as surreal and nightmarish as the past two years. (The internet tells me the script was written in 2017, and production began and presumably completed in 2019.) I found myself wondering whether the film has come a moment too late, or whether it offers some comfort to those of us still grappling with living in a pandemic, or whether its metaphysical concepts make it infuriating and inadequate to the moment. Your mileage may vary.

The British Film Festival screens in cinemas around the country from 3 November to 1 December.