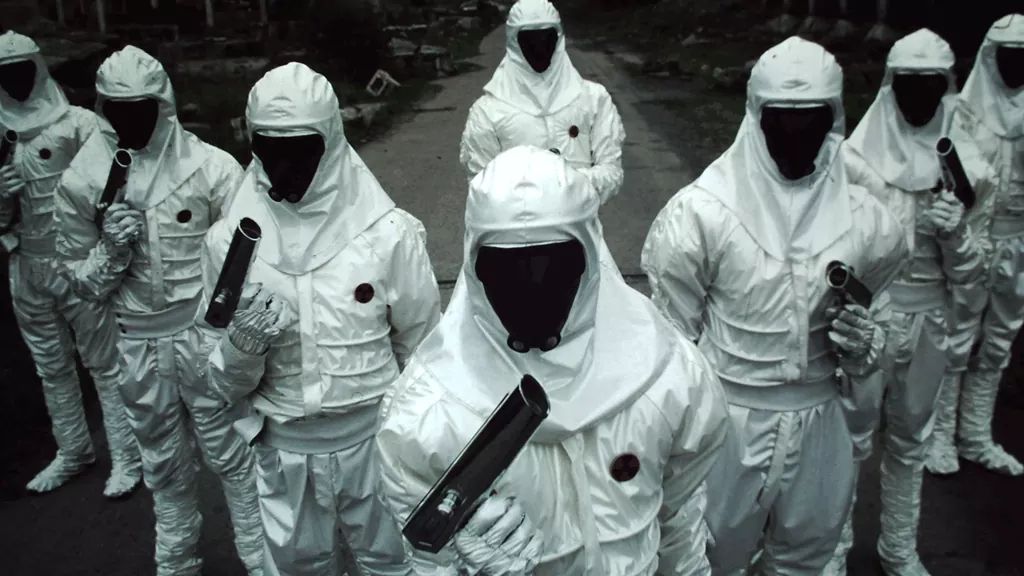 Steve Bisley. A name I would generally associate with only Water Rats. Maybe, just maybe I might think of Mad Max or Red Hill. But generally, if you said to me, “remember Steve Bisley”? I would reply with, “the guy from Water Rats”? But no more. I will no longer utter Bisley’s name as if it does not belong up there on the Australian actors pedestal with his previous Mad Max co-star Mel Gibson or Crowe, Jackman, Kidman or Blanchett. You see, I recently watched a film in which Steve Bisley was the star – The Chain Reaction (1980) – and it was glorious.

The Chain Reaction follows Larry (Bisley) and Carmel (Arna-Maria Winchester) as they try to help Heinrich (Ross Thompson), a man who they discover one night, who unknown to them, has been infected by radiation poisoning. Their efforts to save Heinrich, however, are heavily thwarted by Grey (Ralph Cotterill), a man who is attempting to cover up the corporate accident that poisoned Heinrich in the first place, as well as the widened effects it will have on the general public.

Hailing from the year 1980 it’s easy to confuse The Chain Reaction for a low budget B-grade movie that isn’t really worthy of a second look while you’re perusing the DVD section at JB Hi-Fi but I can assure you, it certainly is worth a look. Sure, it’s got some dodgy sound affects – the lightning sounds like ripping paper – and Bisley’s pants are so tight that it makes you think they could only afford costumes from the kids section at Trims. I imagine that if Jay and Silent Bob watched this movie that Jay would be quick to point out the trouser snake. Also keep an eye out for a young Mel Gibson, Frankie J. Holden and Kym Gyngell.

Bisley, as Larry, is perfection. An everyday average Joe that’s been sucked into a bad situation he can’t get out of. He portrayed the Aussie larrikin who refuses to get pushed around like no other could and it was awesome. While under arrest, a police officer who’s trying to drive his sick Holden Ute asks if ‘the car even goes’, to which Larry replies ‘into orbit mate’ with perfect sarcasm. When Gray asks him a vague question he replies with robustness ‘ don’t understand your Jargon mister’. It rolled off his tongue with all of the might of an A-list Hollywood actor (I literally used the line the next day at work) but sadly, Steve never really experienced Hollywood. I’m not saying that Bisley hasn’t enjoyed a long and well received career that he himself would be surely proud of. What I am saying, is that Hollywood has missed out – but for all I know, Hollywood came knocking and Steve turned it down in favour of sticking to Australian productions.

Arna-Maria Winchester as Carmel is also quality. She is tough and rigid and is the perfect match for Larry’s personality. Carmel is also a nurse and shows great care in taking care of Heinrich – standing up for him when in the face of danger after Gray has taken over their cabin. Ross Thompson as Heinrich is competent at best, he isn’t the best performer in the film, but certainly isn’t the worst. His struggles to remember what has happened (due to the short term amnesia he suffers after a head injury) are sometimes frustrating but he does manage to keep you engaged in the character. Ralph Cotterill is uncompromising as Gray, he is a methodical killer with what seems to be a never ending production line of bad guys. If only he had a pack of Tim Tams. There is also a suave performance from Hugh Keays-Byrne as Eagle.

The car chases and stunts were also great. Larry’s modified Holden 1-tonner goes like a bat out of hell, with George Miller (Mad Max), taking care of stunt co-ordination after being unavailable to direct full-time due to his already busy schedule.  Ian Barry however, who wrote and directed this film – his first feature – did a great job. Its schlocky here, looks cheap there, but it’s great fun. He did so well that when the film sold at Cannes Film Festival, Producer David Elfick said “it could have been sold three times over in every territory in the world”. After the sale the film immediately started to make a profit – if that doesn’t tell you it is worth a look, then nothing will.

Finally, I NEED to talk about the already well noted soundtrack. Back when it was released the soundtrack was so well thought of it was even advertised on the movie poster in bold writing. You don’t see that too often these days. The electronic sound track is great, it compels itself into the film. The original music by Andrew Thomas Wilson was phenomenal. Remember, this film is just under 40 years old, it is nothing like what we see today, and personally, it’s part of what made seeing it the first time so special.

But it’s not just the film you need to watch. The new Blu-Ray release from Umbrella Films includes some very cool special features.

To start with there are some deleted scenes. They don’t really add a whole lot to the essence of the film but there is more of Bisley acting out against authority and seeing more of his larrikin Larry character so it is worth giving them a look. There are also a few trailers and a TV spot. The TV spot is awesome, if the same TV spot came out today it would certainly garner more than a few YouTube hits. It was exciting and it made me want to watch the film (again).

There is also a new featurette – Thrills and Nuclear Spills which provides some great insight into the making of the film and the extended Not Quite Hollywood interviews with cast and crew are also fascinating. But what is truly worth your time and money is The Spark Obituary featurette. After an introduction from writer/director Ian Barry you’ll stumble across a short film (just over 20 minutes) which will blow your mind. If I was reviewing that by itself, I’d give it 5 out of 5 stars.

The Chain Reaction is a fun ride full of high octane chases and faceless bad guys and keeps you engaged with great stunts and an awesome soundtrack. The film is completely enjoyable and is definitely worth picking up with the new release Blu-Ray full of special features make it all that much sweeter.