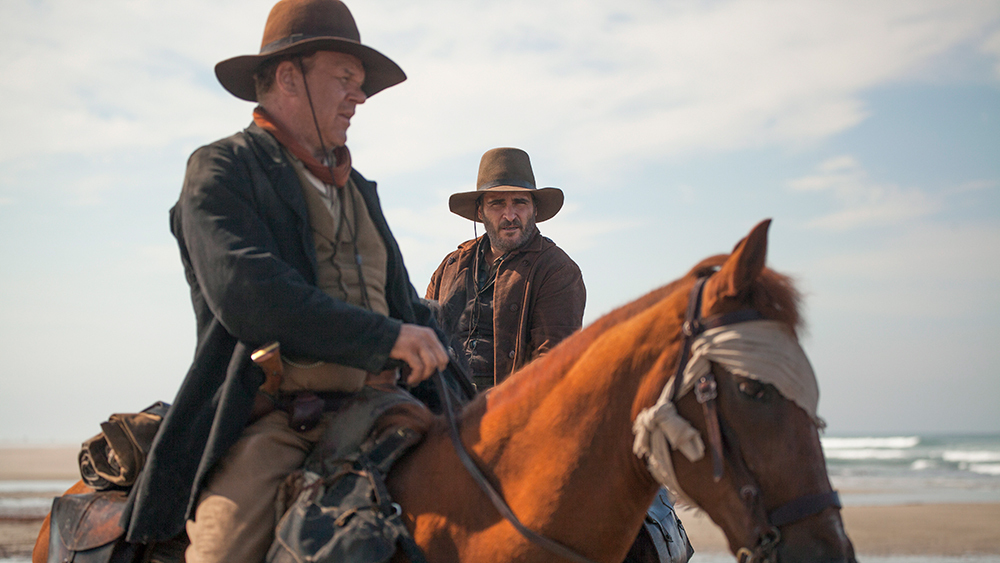 I’ve had this review sitting at the top of my ‘to do’ list for a good two weeks now. Yet, whenever I sat down to write, it slipped my mind. I simply forgot that it needed to be done. Which is a mighty shame as that in itself says a lot about The Sisters Brothers – the latest film from Jacques Audiard, working here for the first time in English.

The titular brothers are played by John C. Reilly as Eli and Joaquin Phoenix as Charlie, and as siblings they work together as criminals in colonial America, dolling out punishment and reaping bounties for Rutger Hauer’s crime boss, The Commodore. As the tale begins, they are sent off on a journey to track down Riz Ahmed’s scientist, Hermann Kermit Warm. Meanwhile, unaware to the Sisters Brothers, Jake Gyllenhaal’s opportunistic crim, John Morris, has encountered Ahmed’s genius and works his way into being a part of whatever invention Hermann has in hand. It’s clear from the cast that exceptional talent is purely dripping from this film.

With a script by Jacques Audiard and Thomas Biedgain, based on Patrick DeWitt’s book of the same title, The Sisters Brothers certainly exudes attention to detail and care to depict the era as faithfully as possible. There has always been something of a skewed perspective when foreigners craft tales about a country, where they are able to see life through different eyes than the people who live within its borders – think of Canadian Ted Kotcheff’s view of Australia with Wake in Fright, or Brit Andrea Arnold’s look at the youth of America with American Honey. Audiard carries an inquisitive tone to this glimpse of America. He’s clearly curious about the way America dealt with massive changes within society as towns and cities were conjured out of the dirt, and in turn, how the inhabitants lived with a wealth of inventions that worked to change their daily lives.

John C. Reilly’s Eli is easily the most engaging character, with Reilly delivering a career best performance as a man who is continually curious and concerned about the way the world is morphing into some kind of abstract of the world that has existed before. When Eli purchases a toothbrush, he finds the novelty of such an item entrancing, and the existence of the toothbrush in his life almost becomes a catalyst for him rediscovering the world around him. Is there more to this life of crime? Is the prostitute that he visits an actual person and not someone to simply sleep with? What would happen if, as brothers, the Sisters managed to turn their nefarious gains from crime into a life of business and servitude to society? Is the horse that he rides capable of emotions, making him more than a simple tool?

The concept of the deconstructed Western has been worn to death, so much so that the Western genre is nowadays almost purely filled with deconstructed Western’s. While the notion of diving into American history at a massively pivotal point, and looking at it from a scientific perspective, all sounds interesting, it’s surprisingly devoid of any level of immediacy that secures its place in your mind. The curiosity Audiard has for this era and those who lived at that time never fully rubs off on a narrative that feels more meandering than contemplative. Yes, Eli is open to questioning what his role in America is, but the trigger happy Charlie wrassles the film down to the basic roots of the Western genre – namely, shoot first, ask questions later.

Admittedly, the gunfights are inventive and exciting to watch. The opening fight in particular is stunning to watch, as a darkness drenched world erupts into chaos as gun powder lights up the night and bodies collapse on the ground with a thud. Yet, for all the excitement that the violence creates, Audiard manages to tut-tut the actions of Charlie by making him a reckless devil who tears through the world with almost wanton carelessness. When the brothers encounter a town that had been crafted at the hands of a woman, Charlie sees this as an affront to the inhabitants and sets about tearing it down with bullets and willpower. Joaquin Phoenix is solid as Charlie, but there is a feeling that he is sleepwalking through this performance, as if he’s already been here before as an actor.

It’s a trope we’ve seen utilised over and over again – two brothers who work together, with one who can’t change his ways, getting the two into trouble –, and unfortunately The Sisters Brothers struggles to breathe life into it. With that said, it is by design that the blending of Eli’s progressive mindset and Charlie’s destructive nature does not gel with ease. There needs to be friction and discomfort for the thematic elements to work, which unfortunately doesn’t make for particularly exciting viewing. Further to this, Riz Ahmed’s Hermann and Jake Gyllenhaal’s John appear to exist to add to the notion that men are naturally self-destructive and greedy. The opportunistic nature of masculinity fosters a realm of self-service where the only person that matters is himself.

Romantic Road Review – A Nice Film About a Rolls Royce, India, and the Grey’s

Where The Sisters Brothers concludes is wonderful and apt for the story that Audiard has told. It’s a gentle conclusion, rather than a very possible ominous and destructive one, and one that suggests that while the characters of The Sisters Brothers are regularly destructive, they are still empathetic creatures. If there’s a ‘full stop’ remark that Jacques Audiard appears to be making about America, it’s that for all the violence that helped make the country what it is, not much has changed in the decades that have yawned between then and now. Except, maybe, the way that the criminal behaviour of the Sisters brothers has been turned into regular business practice due to the insidious nature of capitalism.

In the moment, The Sisters Brothers is entertaining, and regularly amusing with a spattering of empathetic comedy, and while the themes it explores are salient and interesting, it is simply not enough to allow the film to linger in your mind in the same way that the majority of Jacques Audiard’s work does. And, now that I’ve written my review, I will unfortunately go back to forgetting that I’ve seen this film, only to have it be the answer to the question ‘what has Jacques Audiard been up to lately?’ that I will no doubt ask myself in six months.