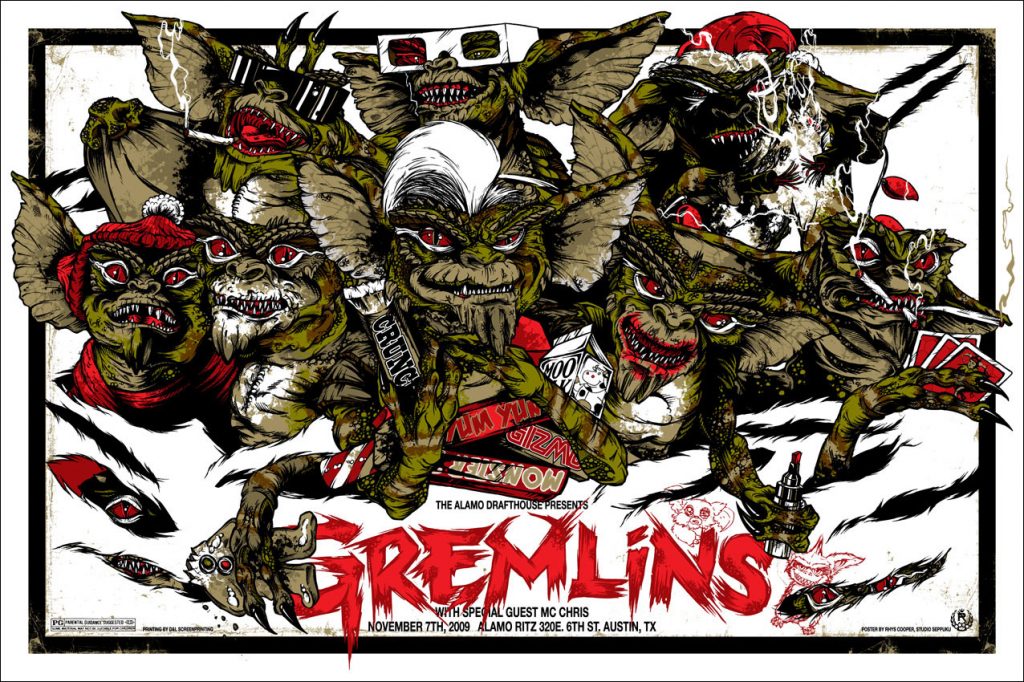 40. Mike Saputo’s Pet Sematary print is a genuinely fascinating print to behold. At first glance you think it’s just a really pissed off cat staring at a guy digging a grave, but as you look closer you recognise the cats ears make up the symbols that make the resurrection of the dead possible. The mouth of Church the cat consuming the coffin that holds the body of Gage, Louis’ son, is a haunting image that manages to evoke conflicted emotions – fear and grief and hope.

The framing of the white clouds on the left against the pitch black dark sky on the right provides a contrast that helps direct your attention to the bright red in the middle. Heck, Saputo’s choice and placement of colour here is simply stunning. The dark black mound that Louis is digging in to swallows the bright red coffin entirely. It’s a crying shame this print isn’t given more love as it’s a complex print for a genuinely great horror film.

39. There’s a bit of a running theme with this list – dinosaurs. Some are raging, fighting creatures, destroying themselves as nature dictates they would. Others, like JC Richard’s Jurassic Park print show a tranquil aspect to dinosaurs as they go about their business, eating and existing. Dan McCarthy’s calming The Lost World print shows a line of brontosauruses walking through a forest. It’s simple, and it’s a print that’s atypical of his work that often displays nature in all its beauty.

Sir Arthur Conan Doyle’s literature allowed us to dream of a world where anything was possible, where dinosaurs existed at the same time as us. Dan McCarthy’s dream like print is one that I have hanging on my walls and I find myself losing time staring at it. It’s tranquil and peaceful, and oddly hopeful.

38. While most of the entries on this list are great looking images that can be appreciated on your computer or tablet of choice, Kevin Tong’s The Invisible Man print is one that looks a million times better in person. The art of screenprinting is an interesting thing – it’s not just putting layers of ink down on top of each other to create art on paper, it’s also the design that goes in to making that image printable and as authentic to the original picture as possible.

What works so well about this print is that Tong’s pencil work and sketching manages to convey the idea of this invisible man so very well. Set in a science lab, this image feels like somebody has sketched a theory on paper, presenting the world with a man tortured by his apparent visible absence within the world. The rags that hang around his head are taut as they are peeled off his face, his angst and fear being represented in the bunched up rags around his hands. Tong’s work covers many styles, but it’s his knowledge to use this style that (once again) pushes him onto that Mondo Mt Rushmore.

37. I’ll have to be honest here – I haven’t seen Walter Hill’s cult classic The Warriors. I have a fair gauge of what the film is about, and know that it’s one I’ll need to get to sooner or later. Tomer Hanuka’s work has gotten better with age, but within the realm of Mondo prints, he has never topped his work on The Warriors.

There is a feeling of motion within this print that is undeniable. Hanuka’s typography carries with the raging police officers as they chase the warriors of New York through a subway stop. The missing tiles on the wall show a city that is weathered, the muted colours evoke a feeling of exhaustion. It’s hard to evoke an era of a city so perfectly, (Martin Ansin did exactly that with his glorious Taxi Driver print) but Hanuka manages to do just that with this print. Even without knowing what persecution these fleeing folks are running from, you can’t help but hope that they manage to escape.

36. How do you make oil, religion, death and greed into an alluring, fascinating print? Well, if you’re Olly Moss, you combine all of those together into one jaw dropping, yet drastically simple print. Again, Moss creates work that often leaves you saying ‘why didn’t I think of that’?

Paul Thomas Anderson’s film is a horror film that damns the foundation of America, slaying the marriage of church and state, and the eternal affliction that is greed. Here, the oil rig is transformed into a cross. At once, it appears to be a very cynical print that takes a dig at the symbiotic relationship between religion, mining and the land. The pitch black bottom half of the print gives way to the red-orange top half – devastation reigns, and there is most certainly blood.

35. In the words of Todd Slater, he sees Yoda’s resting place of Dagobah as ‘a place to disappear, … I see [Yoda] as being at one with the landscape. For this print I wanted to camouflage him as part of this murky planet using leaves, sticks, ferns and other flora found in the swamps. The kanji (Japanese characters) on the left side gives one word representations of the six stages I identified in Luke’s Jedi training: the meeting of a great warrior, the discovery of a Jedi’s strength, entering of a domain of evil, learning that size matters not, seeing the future and finally, the confrontation of Vader.’

While the Jedi ghost forms are usually transparent glowing blue figures, Slater’s representation of a creature at one with the environment feels like a more appropriate display of Yoda as a character. The wise eyes of Yoda are unmistakable here, showing a warrior who is weary, yet still full of eras of knowledge and power. A simple concept that is perfectly executed.

34. Howard Hughes epic action film Hell’s Angels is a fascinating piece of film history, with the film being partially shot with bulky cameras in real, chaotic dogfights. Martin Scorsese’s film tells the tale of Howard Hughes, and through his eyes we get to see how Hughes would have filmed the iconic scenes of Hell’s Angels.

Here, Hughes sits in a plane that’s zipping through the skies. Aeronautic stunts are abound here, with Hughes camera pointing directly at a plane in peril – smoke pouring from its tail. Instead of machine guns, it’s film cameras that’s shooting the action. Jonathan Burton captures what renegade filmmaking would have been like in the founding years of the format. As a further sign of respect to cinema, Burton’s prints were created with two varied palettes (Technicolour inspired two colour and vibrant three-strip).

33. Within the energetic chaos that is Joe Dante’s Gremlins is one of the most insanely enjoyable and rapturous scenes of eighties cinema. The town has become overrun by these ugly creatures, and as quickly as they have been born, they’ve become film fans (whoever raised them did a great job). A cinema of Gremlins sit in a packed theatre, munching down on popcorn, throwing trash, and thoroughly enjoying Snow White and the Seven Dwarves. It’s Looney Tunes madness writ large in live action.

Rhys Cooper’s print smashes all the iconic Gremlins together, appearing in a crazed group, tearing through what could be the cinema screen. It’s madness, it’s joyous, it’s everything Gremlins is – fun with a bite.

32. Another film on my shame pile is Star Trek II: The Wrath of Khan. Yet, just like Rosebud and ‘frankly my dear, I don’t give a damn’, the characters of this sci-fi classic are larger than the confines of the film that holds them. Ricardo Montalban’s eyes pierce through the centre of this print, directly into your soul.

The maniacal hands that loom over the Starship Enterprise, like a witch hanging over their magic ball. WeBuyYourKids choice of vibrant shades of pink, black and white works wonderfully to direct your eyes exactly where they need to be. A poster should make you interested in seeing the film, and this print does exactly that. Great stuff.

31. At the centre of Joe Dante’s Gremlins is the tortured Mogwai Gizmo. He who unwittingly caused all of this destruction. Yet, at the centre of the many, many prints for the film, Gizmo is absent. In what is the best print for the film, Ken Taylor presents the mystical origins of Gizmo in the form of his true nemesis, Stripe.

Stripe’s hands reach out in both Mogwai and Gremlin form – angling to do all manner of evil things to you. Ken’s use of circular icons helps differentiate the two figures, while also subtly informing the history of where these creatures came from. You can’t help but think that maybe, just maybe, if this were hanging in that little shop in Chinatown that Billy’s Dad would have known better than to buy his son a ‘unique’ Christmas present.

And that’s it for this round. Tomorrow we head into the home stretch with Part Eight covering entries 30-21. 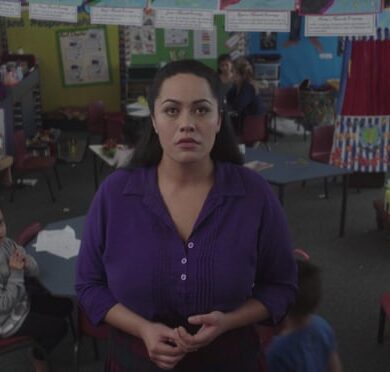