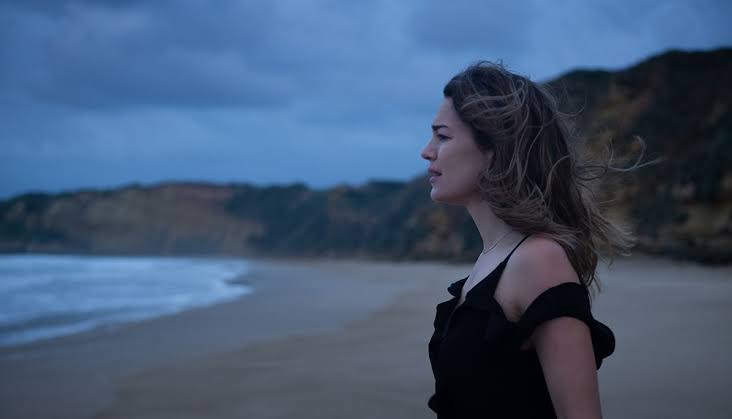 The film opens with the heavily pregnant Claire in the bath gently washing her stomach. This scene is intercut with the gorgeous Angie checking herself in a mirror before arriving at a private club where elite sportsmen, including Dan, drink, gamble and take huge amounts of illicit substances. The scenes cut back and forth as Claire’s bath turns red from the beginnings of a third-trimester miscarriage. As Claire desperately tries to contact her husband whilst she drives herself to the hospital, we witness Angie, so wasted that she is barely able to light a cigarette watching as a shapeless man comes into frame; the implication that she is about to be sexually assaulted. When Dan finally arrives at the hospital Claire is overcome with grief and exhaustion. The couple’s child was stillborn. Claire faced trauma and loss without his presence or support.

Filmed on location in Geelong with exquisite cinematography by Bonnie Elliott, water is a central motif in the film. From the first bath scenes to Claire employing her time post-miscarriage to photograph the marine life and ocean outside the mansion she owns with Dan. Claire begins to focus on finding the refuse the sea as metaphorical amniotic sac has rejected; abject creatures such as a half-rotten seal choked with weed.  Another central motif is the use of mirrors. Just as Claire runs her hands over her stretch-marked body, we see Angie using mirrors in her roach-infested hotel room to snap suggestive selfies of herself to send to unknown men. The film leaves a question mark over who Angie is trying to seduce at any stage.

As Claire begins to collate images of death, including a wine-drenched image of her stillborn child she is participating in grief support classes for parents who have had a stillborn child. The classes encourage parents to have rituals to say goodbye to their child; including using dolls and pools of water to perform cleansing and baptism rituals.  Claire is reaching a dissociative state in the classes. Dan speaks of his feelings of loss but she’s unable to hear him. Her visions keep flashing back to images of the ocean and how she is drowning in her sea of personal postpartum depression and grief. She has been told by her gynaecologist that due to the severity of the miscarriage her chances of another her successfully carrying a child to term are limited.

Making the slow transition back to full-time work, Claire passes the cheap hotel where Angie lives. She witnesses what she perceives to be Dan either arguing with or trying to cajole the young woman.  Claire calls Dan to ostensibly check in with him and watches whilst he lies to her about his whereabouts. This moment portends the first meeting of the women as Claire begins to stalk Angie rather than confront her directly to find out why her husband was with her.

From the moment the women meet, and Claire is told Angie’s juicy secret that she is pregnant, it becomes uncertain whose subjectivity or reality the audience is witnessing.  Claire imagines herself as the protector of Angie’s unborn child. Claire wants more than to protect the child, she wants to somehow inhabit Angie’s body. Scenes that are distinctly psychosexual show Claire unsure if she wants to be Angie’s mother, protector or lover.  In turn, Angie wants to know why Claire won’t leave her alone. Once she realises that Claire’s concern for her welfare is motivated by ownership of her unborn child, she becomes more desperate to be freed from the grasp of a series of abusive people. Claire’s obsession with Angie is exploitative.  Nowhere in the film is there an equal playing field between Claire and Angie. Angie is a victim and comparatively a child who is further victimised by Claire’s obsession with controlling her.

A similar interplay goes on between Dan and Brett.  Dan is trying to save Brett from the scandal Claire instigates by leaking pictures of him with the underaged Angie.  Brett is a victim of a set of circumstances brought on by elite sportsman worship in Australian culture. He feels that no woman has ever cared for him, they’re all with him for the prestige of being seen with him.  This kind of mindset has led to him being both profoundly lonely but also near sociopathic when it comes to the treatment of others. Dan, in turn, has put the reputation of his club before the welfare of his wife and friend.  Each time he tries to make amends for his perceived culpability in the situation between his wife, his best friend, and a young woman — his priority is always protecting his image — and the image of the sport that has made him famous.

When Claire eventually unravels to the point of mirroring Angie by having sex with Brett, she completes her circle of self-destruction but also ensures his tangible destruction as she wades into the ocean where he attempts to rescue her losing himself in the process.

Claire’s catharsis is vengeful.  When she feels sufficiently healed, she removes the bizarre shrine she created that visually exploited Angie, Dan, and Brett.  Her final moments of satisfaction have come at the cost of three people. The only loss she was ever concerned with was her own, she is monstrous.

Visually the film is superb, Bonnie Elliott’s cinematography anchors the film by contrasting the powerful ocean and water metaphors with the ugliness of the urban landscape of the regional city.  The contrast makes the inequality between the firmly bourgeoise Claire and the working-class Angie starker.

Olivia DeJonge’s performance as the naïve yet hard as steel Angie is magnificent.  She is not a likeable young woman — yet considering what she has suffered there is no reason for her to be. Laura Gordon is mesmerising as Claire. Moments of verisimilitude abound as she pulls so many lives down with her swell of hideous grief. Rob Collins and Josh Helmann give varying performances. Collins has more grist to work with as the “nice-guy” Dan. It’s important to note that as an Indigenous Australian player he has more to lose if his reputation is questioned. There is less narratively for Helmann to work with, and because his toxic masculinity has been writ large through the film, it’s difficult to find a point of true sympathy with him as a touchstone.

Undertow is a film about the complexities of what it is to be a woman in the specifically male-oriented world of professional sports in Australia. More than that it is a production that is almost completely dominated by women in all major production roles ranging from direction and overall production (Lyn Norfor), through to production design, music, and editing.  For a first feature, it is remarkably assured and well deserving of its nomination for Best International Film at the Edinburgh Film Festival in 2019.