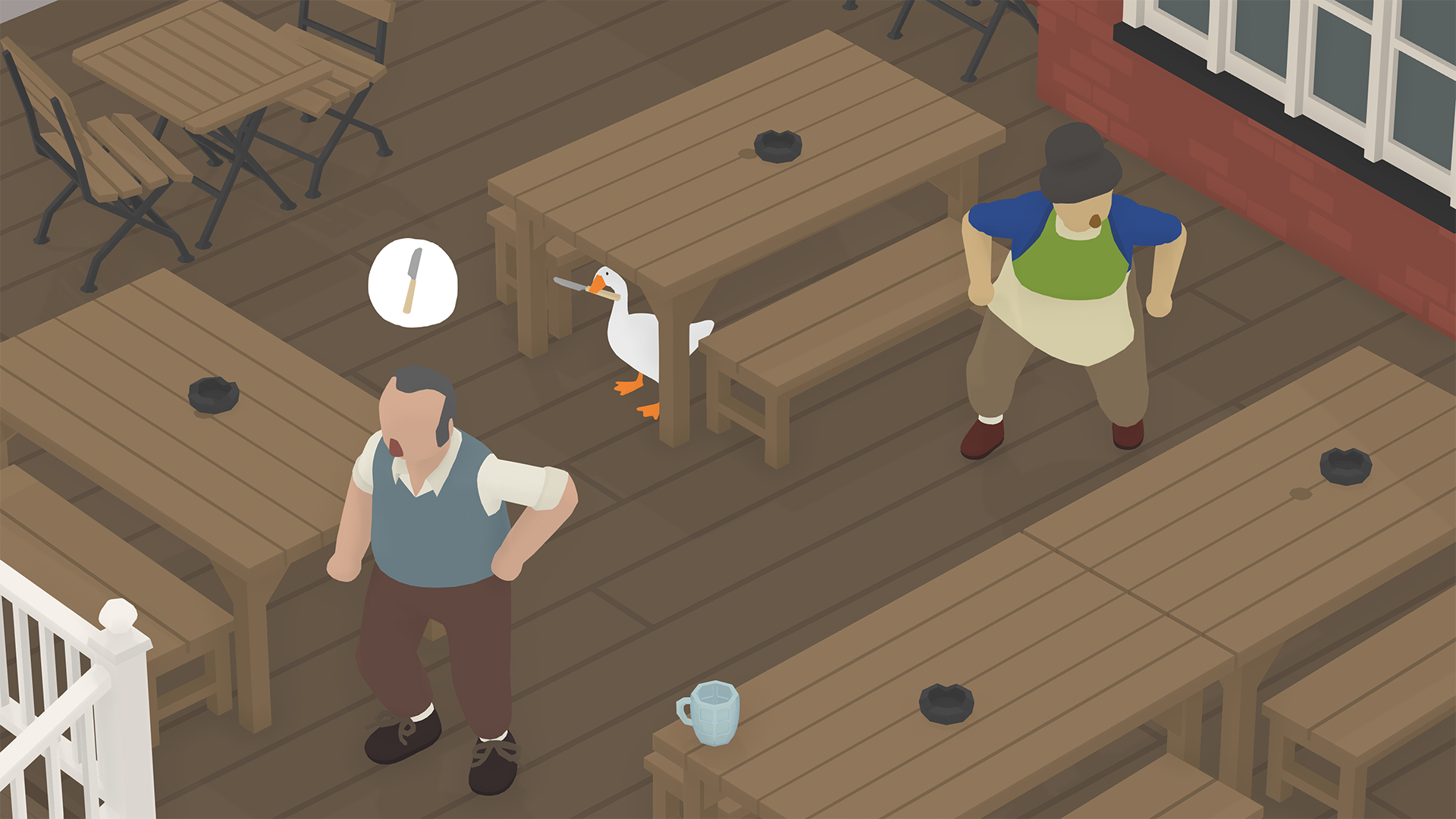 At a recent social event, I found myself amongst a group of relative strangers. Somehow the conversation weaved itself to the question of what we would like to do before we die. A fairly innocuous question, really. Usually people answer with something like, ‘I want to go skydiving’, or ‘I’d like to swim with sharks’, but for some reason, whether it was the alcohol or the social anxiety, I spurted out with something I’d never thought of in my life before, and most certainly do not want to do before I die.

Writing this, I know the absurdity of the statement. Who in their right mind wants to push an old lady over? Why on earth would you want to do that? What madness would drive someone to walk up to an old lady, stare her down, and then, with both hands, push her over onto the ground.

Reading this, you have played out the scenario in your mind. You see a thirty something, bearded buffoon of a man, walking down the street, cocksure and arrogant. On the other side of the road, he sees an old lady, wearing a bonnet and pulling her shopping basket. A fire rages inside of him, and with no regard for the traffic, he crosses the road and storms up to the old lady. He stares her down. She attempts to lift up her head to see who has blocked her path, but before she can make out who it is, she’s flung backwards by a violent shove. In an instant, she’s splayed on the ground, the tears are immediate. Without regard, the man storms off down the road. His goal has been met and his life is complete. An old lady has been pushed over.

But that’s not the narrative that played out at the social event. As soon as I’d uttered the misguided words that before I die I simply must push over an old lady, I knew they were absurd and inconceivable.* So, instead of saying, ‘shit, I have no idea why I said that, I most definitely do not want to do that’, I ended up digging further, proposing a situation where it would make pushing an old lady over ok. ‘It couldn’t just be any old lady. No. She’d have to be someone that would be socially acceptable to push over. Say for example, I’d have to be walking down the street and see this old lady shouting racist things at a family. I’d go in and say, hey, you can’t say that, and she’d respond something offensive, and then I’d push her over because she’d deserve it.’

The hole was as deep as it ever would be, and this was most certainly not my proudest moment at all.

I’ve reflected on this quite a bit, wondering how I ended up concocting a bizarre, manic scenario where I justify the need to push over an old lady, and I have come up with nothing.

This mildly unnecessary scene-setting is in service of explaining why Untitled Goose Game is such a profoundly brilliant game to play. The eager dickishness of a goose is embraced with gusto in this Australian developed game, with studio House House showing a disturbing level of understanding for these avian assholes.

And, while a goose cannot push over an old lady, a goose can certainly pull a chair out from beneath an old man and make him fall on his bum.

When a human is terrible to another human, there needs to be justification for it. Whether it’s racism, hate, defense, or whatever other decidedly human construct, there’s a purpose. But, when a goose is terrible to humans, well, it’s different. They’re just doing what a goose means to do.

When you boot up the game, you’re presented with a bush that asks you to ‘press Y to honk’. If there’s any justice in the world, this will become the new ‘press F to pay respects’ meme. The game gives you a huge level of encouragement to mash that ‘Y’ button at every opportunity, and believe me, you’ll want to be honking all day long. There’s something so purely enjoyable about a humble honk. It’s short, to the point, and expressive beyond all means. It’s a sound that encompasses a myriad of expressions – move! fuck you! shut up! hello! – and it’s one that, when employed in Untitled Goose Game, feels so perfectly cathartic. It’s as if you’ve just been presented with a way to verbalise all the things that you’ve struggled to express in your life, and that way is via ‘honk’.

After you learn how to vocalise and become your true self, you’re introduced to an interconnected village full of people living their village living lives. A gardener toils in his vegetable patch. A child plays with a toy plane. A man puffs his pipe and reads his newspaper. It’s very Midsomer Murder-y, and I’m convinced that the woman who runs the makeshift stall is the killer.

This is what happens when you immerse yourself in the world of goose. You look at life differently. You see these people living their routine rote lives, you see the loop that they’re stuck on, and you can’t help but want to disrupt everything. You can’t help but just, well, honk.


After I’d tired of bothering the gardener, having thrown his radio, hat, and rake, in the lake, I waddled on to the next area and discovered a young bespectacled boy playing with a plane. I scared the shit out of him by honking at him, causing him to fall to his knees and drop his glasses. While he was down, I untied his shoelaces and stole his glasses, dropping them in a puddle. I then went to the nearby stall and stole a pair of the ugliest glasses I could find, and dropped them in front of him. Being the fool that he is, he put them on, unaware of how unstylish his new goggles were. I then honked incessantly at him, scaring him into a phone booth, where he ended up calling his mum to save him. She stormed out of her electronics store, and I ran into it, flicking a switch and beaming myself onto the TV’s in the stores window.

Later, when I stumble into a pub, I meet two women who are willing to speak my language. They want me to honk, so I honk. They want me to flap my wings, so I flap my wings. It’s very genial and nice. Sure, these women don’t have feathers or a beak, but they feel like my kin. I’m sure if they had a drink or two more, they’d be on board with a touch of anarchy and chaos.

Because that’s what Untitled Goose Game really is. It’s about causing a little bit of anarchy, creating a touch of chaos in the lives of regular people. There’s a knowing monotony to the puzzles that House House have created, and that monotony is the act of living a regular life. Untitled Goose Game forces you to think about disruption and disturbance. How do you get a gardener to put on an oversized sunhat? Well, you pluck a tulip out of the ground, forcing him to replant it, and then, while he’s kneeling down, you steal his hat and throw it in the pond, making him wear a silly hat instead. Each area that you waddle into has a set task that you need to complete before the next one opens up, but you never feel like you’re overwhelmed with things to do. Instead, there’s a relaxed vibe throughout the game, one that encourages you to just enjoy yourself, and enjoy being a goose.

Games often put you in the shoes of a human protagonist, which for some of us (namely, me), makes the inadvertent anarchy that we cause carry a level of guilt to it. Take Grand Theft Auto V for example. A technically masterful game that comes with an inevitable level of mayhem, and with that mayhem comes an unwelcome level of collateral damage. The realism of that game makes me concerned for the disruption to the lives of these digital people. Sure, Rockstar do a good job of making everyone in that world feel like they had it coming, but that doesn’t stop me from feeling bad.

But, Untitled Goose Game strips that guilt away, making the annoyance that people have from the antics of a goose feel like pure ecstasy. See, you’re not killing anyone, and you’re certainly not causing any permanent destruction. Instead, you’re merely causing a minor inconvenience to their day.

And that’s why Untitled Goose Game is a game full of pure joy. It gives me an avenue to vent and exhaust frustrations without consequence. I feel ok with scaring a little kid because that’s what geese do. Heck, there’s a reason why watching videos of kids or people getting chased by geese is so enjoyable. It’s because we’re just people living in the World of Goose, and whenever we encounter a goose, they’re always there to remind us that we’re lucky to be here.

When I think about my bizarre statement about wanting to push over an old lady in relation to Untitled Goose Game, I realise what I was really wanting to express was an untapped desire to create a little chaos for a day. I don’t want to hurt anyone, I just want to inconvenience their day without consequence. Untitled Goose Game allows you to do that freely. It sets up a sand pit and welcomes you the ability to be an asshole.

Untitled Goose Game is a game that you had no idea you needed til you play it. It’s a game that knows what you need in your life, even if you had no idea yourself, and it delivers it on a platter. I cannot wait to see what House House do next, and I really hope that they broaden their scope to more avian assholes. Untitled Magpie Game has a great ring to it.

*I want to add, because of my social anxiety, I tend to not think before I say things, and in turn, I end up saying stupid, absurd, nonsensical things like this. I most definitely never want to push over an old lady. In fact, there are only two things I want to do before I die – meet a sloth, and play with a raccoon.