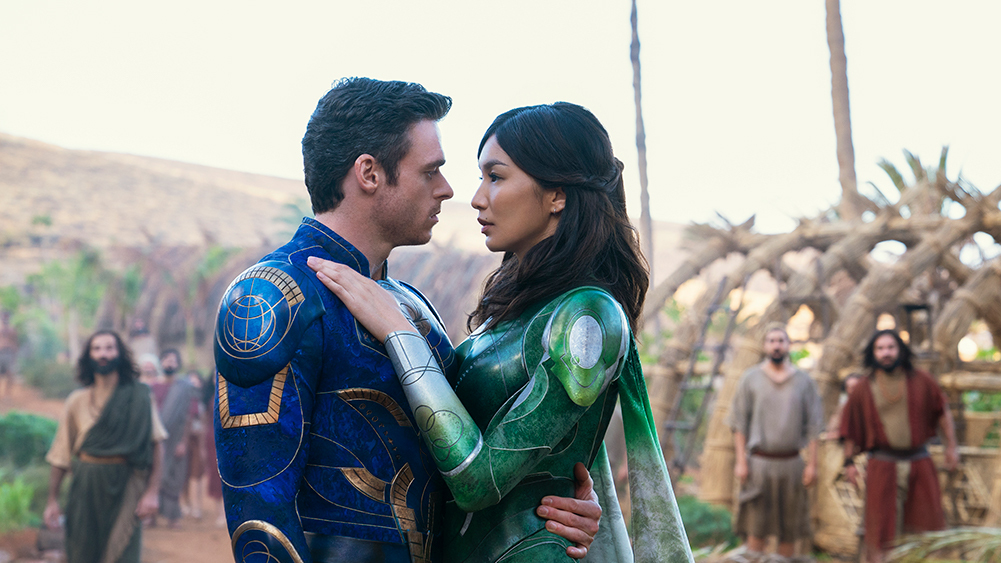 
Marvel Studios have occasionally made some canny choices with directors for its major franchise features. Giving the nod to Ryan Coogler and Taika Waititi for Black Panther and Thor: Ragnarok respectively paid off for the studio by bringing distinct styles into the shared universe. The decision to have Chloé Zhao helm a new chapter in the Marvel Cinematic Universe (MCU), Eternals brought some weighty expectations about the film. Zhao is known for her character driven and essentially quiet reflections about humanity. After her indelible film Nomadland brought home several Oscars, including Best Director, the buzz for Eternals became more than the run-of-the-mill excitement for a new franchise in the MCU; it brought the idea that the audience would be seeing an auteur driven piece that meshed the ultimate in commercial cinema with a unique storyteller to bring “something new” to the superhero genre.

Unfortunately Eternals, although in places attempting to differentiate itself from its MCU predecessors, does not make for a stand-out entry into the canon of superhero fare, and for Zhao it is a disappointing use of her prodigious talent.

The Eternals are a group of superpowered beings created by a race of universally powerful cosmic entities known as Celestials. They are tasked with watching over the inhabitants of planets to ensure their survival and evolution and to fight against the Deviants. The Deviants are alpha predators who were also created by the Celestials but went rogue killing off not only threats to civilisations, but civilisations themselves. Ten Eternals are dispatched to Earth under the leadership of Ajak (Salma Hayek) to eliminate the Deviants and to watch over humanity. Over the centuries the Eternals have entered into the mythology of Earth with their stories becoming part of ancient mythology and religion. Warrior Thena (Angelina Jolie) becomes the template for Athena, Greek goddess of war. Other Eternals similarly enter the human lexicon as legends, and like legends their existence is acknowledged only through myth.

After wiping out the Deviants approximately during the period of the Spanish Conquistadors the Eternals go their separate ways, but as ageless beings they remain on Earth each trying to reconcile their purpose post their given mission. Through a series of contemporary scenes and flashbacks Zhao attempts to give each Eternal some kind of raison d’etre and imbue them with unique personalities. Even with a bloated run-time, getting to know each Eternal is ultimately unsatisfying. Druig (Barry Keoghan) who can manipulate minds has chosen to opt out of modern society as he is frustrated that he can’t stop humans from being violent with each other. Phastos (Brian Henry Tyree) an inventor of technology for human advancement carries the guilt of his creations eventually being used for mass destruction. Strongman Gilgamesh (Don Lee) takes Thena who is suffering from something known as the ‘mad wearies’ to outback Australia to care for her and prevent her violent turns. Only Sersi (Gemma Chan) whose power is transmutation and energy wielder Kingo (Kumail Nanjiani) seem to have careers in the contemporary world; Sersi as a museum curator and lecturer, and Kingo as a Bollywood legend. Sersi has broken up with her Eternal lover Ikaris (Richard Madden) and is now attached to mortal Dane Whitman (Kit Harington) and is also living in London with the illusion projecting, permanently thirteen-year-old Eternal, Sprite (Lia McHugh).

The re-emergence of the Deviants in present day London brings Ikaris back into the life of Sersi and together they travel across continents to reassemble the Eternals team to fight off the threat to humankind once more.

If all of the above sounds like a lot of exposition for a review imagine how it translates on the screen. The world building for the film is patchy at best. Central to the narrative is the centuries long romance between Madden’s Ikaris (he can fly and shoot laser beams from his eyes, something you won’t soon forget as he spends almost all of his time on screen doing so) and Chan’s Sersi. A less believably romantic relationship is hard to fathom despite Marvel going out of their way to prove the two have chemistry with the first sex scene in one of its properties. More believable is Marvel’s first gay character, Phastos, who is living with his husband and son in suburban Chicago. As the Eternals unite to fight the Deviants once more, and of course another threat, it is the relationship that each Eternal has developed with humanity that will guide their course and choices.

Although promising to be less of a CGI-fest than other Marvel entries it’s ironic that the erstwhile antagonists the Deviants are entirely CGI four-legged creatures with limited characteristics except they are predators. Even despite Zhao’s commitment to shooting in real locations that vary from Alaska to the Canary Islands, the film still feels like it could equally have been created on a backlot with VFX. All the hallmarks of a Zhao film are missing, and as she was also instrumental in translating Jack Kirby’s comics into the script the failure of the film to widely engage does rest at least partially with her. The action sequences range from the vaguely ridiculous to mildly engaging – which is of concern when action is primarily what audiences want to see in a Marvel film.

Perhaps the series will evolve to something more compelling in the next instalment as so much ground-work has been done. If one considers that it took the MCU dozens of films to create adequate characterisation for The Avengers, banking the success of a new group of ten (twelve if you’re watching closely) new superheroes in one film could be perceived as folly. Eternals is a film that tries to bring to the MCU a number of firsts, but eventually it is messy and shallow in many places. Kevin Feige may have to adjust his expectations for the Eternals franchise down a few notches, because despite Zhao’s vision being adequate it is in no way ground-breaking.