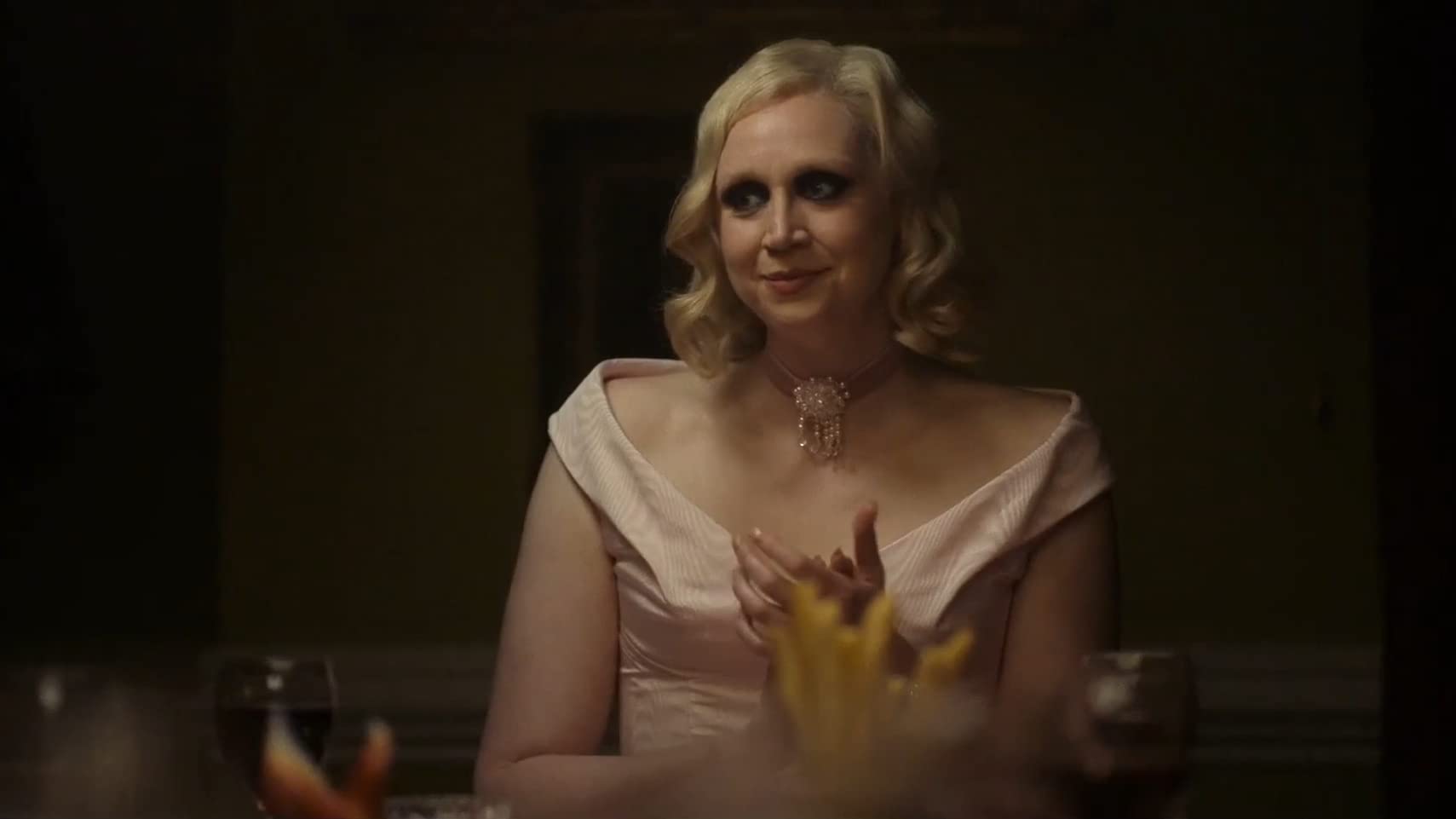 Peter Strickland is a distinct director whose works can equally alienate and seduce. In his latest effort Flux Gourmet Strickland has lost none of his polarising energy yet has created perhaps his most accessible work thus far, and in some manner, perhaps his most personal. Relying on his own set of tropes which include the inherent absurdity of the creative process, power struggles for dominance, fetishism, and an uncanny timelessness that appears to be part of the 20th/21st century but somehow outside of it, Strickland documents an vision that borrows heavily from other creatives yet remains distinctly his own.

The setting for Flux Gourmet is a Sonic Catering Institute run by the patrician Jan Stevens (Gwendoline Christie). In Strickland’s world, performance art created by practitioners using food as a means of creating soundscapes is an elite and competitive field. The institute houses an unnamed sonic collective comprising of Elle di Elle (Strickland regular Fatma Mohamed), Billy Rubin (Asa Butterfield), and Lamina Propria (Ariane Labed) for an exclusive residency which will culminate in a much-anticipated final performance. Strickland leans heavily into the satirical element of performance art, art patronage, and the often-dysfunctional relationship artists have with each other.

Documenting the collective’s stay is “hack writer” Stones (Makis Papadimtriou) whose character provides a voice-over that is both observational and personal. Stones is suffering from an as yet undiagnosed chronic digestive issue and is being subtly tortured by the pretentious in-house doctor, Glock (Richard Bremmer). Stones is ensconced with the “band” sharing cramped quarters with them and trying his very best not to break wind around them. Although Stones’ flatulence could be played for comedic value Strickland instead positions Stones as one of the few sympathetic characters in the film. Stones desperately tries to keep a sense of personal decorum in an environment where good taste is consistently challenged.

Jan Stevens (dressed impeccably and sometimes farcically by costume designer Giles Deacon, with Stephen Jones on millinery) runs the institute as her personal playground, instituting bizarre rituals such as taking the collective on roll-playing trips to the supermarket. Stevens longs to be something more than a patron – she desires artistic input. When she makes even the smallest note about the collective’s performance she is met with such vehement opposition from Elle that a battle royale is waged over a flanger. The flanger is merely symbolic of the tussle between Jan and Elle who are both manipulative characters fighting for supremacy in a niche environment. Jan uses the information gathered from Stones’ interviews with the collective’s members and post-dinner speeches that they are required to give to further drive a wedge between the members of the group. Specifically caught up in the battle is Billy, Elle’s acolyte and ex-lover. His post-dinner speech which resembled something that could have been written by Bataille is a hook that Jan uses to exploit the young man’s psychosexual proclivities and weaponize them against Elle.

Elle is a diva extraordinaire. As front-woman for the collective it is her outré performances that captivate audiences. She knows nothing about music but is adept at conceiving the group’s spectacle (and in passing, good at writing grant applications). Elle’s performances range from the scatological to pieces bordering on body horror. Yet, behind Elle’s façade is an artist who cannot achieve authenticity on her own because in a sense she is a cipher that she has created – someone she has dreamt of with artistic purity but lacks any particular integrity. Elle’s behaviour fosters an increasingly hostile dynamic in the collective that is not aided by the fact she has sexually influenced both Lamina and Billy. While she argues about the sexist nature of domestic responsibility in public (her post-dinner speech is the deconstruction of a clearly sexist cookbook) she also refuses to participate in cleaning up oil she spilled on a stairwell by feigning weakness. Her scatological performance is not what it seems and eventually she facilitates the substitution of Stones as the focal point for the collective in a manner that can only be damaging for the beleaguered writer.

Circling back to how Flux Gourmet is perhaps Strickland’s most personal film is evidenced by his own participation in the art collective ‘The Sonic Catering Band.’ Sound design has long been a fascination of the director, from the bizarre food foley assemblage in Berberian Sound Studio to the very specific fetish related sound work in his short film Cold Meridian. In Flux Gourmet his own band contribute to the soundtrack. Whilst Strickland has never been shy of wearing his influences on his sleeve, from the giallo aesthetic of Argento, to his homage to Jess Franco in The Duke of Burgundy, Flux Gourmet has particularly strong echoes of the work of Peter Greenaway and especially Luis Buñuel (The Phantom of Liberty appears to be a precedent), what is interesting is how he has evolved past pastiche into creating something that is distinctly Strickland because he understands the film history he references so well.

Flux Gourmet challenges what is good taste (aesthetically and artistically) whilst simultaneously being an undeniably beautiful film. Tim Sidell’s cinematography is partnered impeccably with the production design by Harold Chapman and Fletcher Jarvis. Although what we see on the screen can in places be incontrovertibly abject and most certainly unappetising, there is a brilliance to how Strickland flirts with splendour in ugly excess. Flux Gourmet reminds one of the work of Polish director Walerian Borowczyk in its ability to render aspects of the unsavoury into ecstatic wonders.

Flux Gourmet is a film for audiences who are willing to sit with discomfort and a smattering of discombobulation. It is a funny film, but it draws its humour from unusual places. Flux Gourmet could probably be termed as entry-level Strickland especially for the uninitiated to his very specific kind of filmmaking, but it undoubtedly will challenge many viewers. For a film brimming with visual and aural flourishes, it also allows itself to be strangely repetitive. For a satire there are elements that remain undercooked and at times Strickland seems to be outsmarting himself by crowding the narrative with so many themes. Flux Gourmet isn’t always successful, but it’s a perplexing dish that if one is willing to expand one’s palate for, may be something to savour.