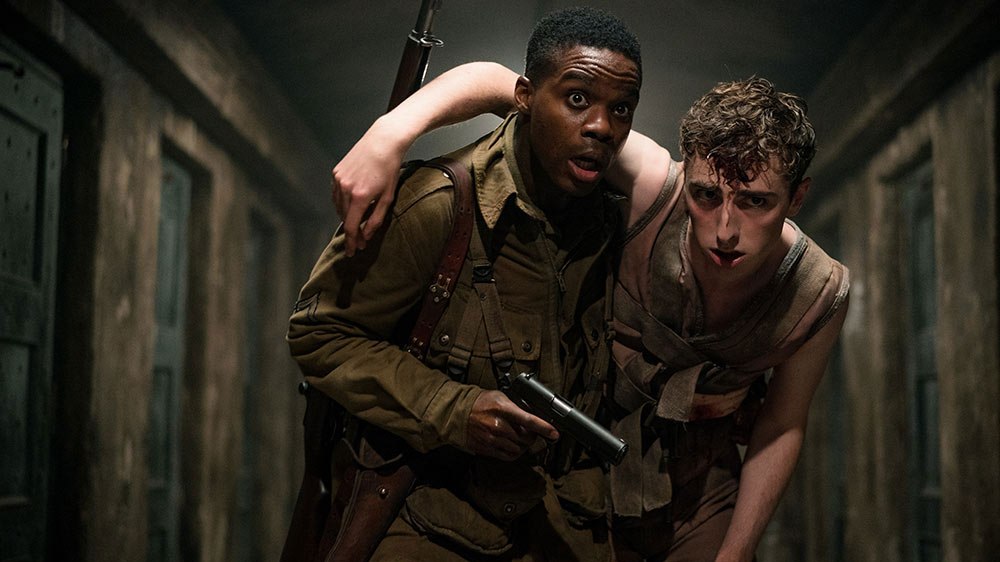 In 2004 Zack Snyder released his remake of Dawn of the Dead. It was a great film. One of the positives for me was that it was straight into it – not flinching for a moment after the first neck being torn apart do we delve into utter chaos and mayhem. Not knowing what has caused this zombie outbreak was something that a lot of people I knew said annoyed them. What was going on? What was causing them to turn? Were questions I heard constantly during our school class viewing of the film. My answer is – if we were in the same situation, we would have no idea exactly what was happening, so why do they need to tell us in the film. It’s also an opportunity for more action, horror, shock, whatever the theme may call for.

Overlord is also in its own right a great film. It revolves around a group of soldiers that are undertaking an important mission during World War 2. Once they get to their target, while still focusing on the mission, they also find something else they need to deal with.

The three lead characters I found were great. Jovan Adepo (Cory from the performance driven, Denzel Washinton directed Fences) played Boyce. A young man intent on being a good one – with good values, morals and all that does not belong on the front line. The other soldiers see this, and he cops grief for it – he’s “soft”. Jovan plays the role well, without any real fault. Mathilde Ollivier is also great as Chloe. A French woman whose only reason for being stuck in a Nazi occupied town, with her younger brother, is the sake of her sick Aunty. She is also being forced into a relationship with a Nazi officer, Wafner (Pilou Asbæk). Ollivier does a great job, her contempt for the Nazi’s is real, her fright for her younger brother is real and that’s all you can ask. Asbæk is also great as the lead villain Wafner. He is an unreserved psycho whose want for power is undeniable. His greatest parts of the film however come toward the end when he finally gets to grip the power he is so clearly after.

Wyatt Russel, the son of ageing star Kurt Russel rounds out the people we’re supposed to care about as platoon Sergeant Ford. A war torn, battle hardened tough guy whose disregard of anything emotional is a clear sign of the trauma he has suffered during war. Russel is great in the role and I hope to see him in more action films in the future, maybe he could go the direction of his father and become a household name. You can also check Russel out in Cold in July – a great film from 2014 also starring Michael C. Hall, Sam Shepard and Don Johnson. The rest of the characters of the film, aside from Rensin (Bokeem Woodbine) are forgettable.

Director Julius Avery (director of Aussie gem Son of a Gun) does a great job for the most part from a somewhat shaky script from Billy Ray and Mark L. Smith. The opening 15 minutes in a plane were among some of the best scenes (Bokeem Woodbine as Rensin makes the absolute best of his 15 minutes in the film) and the scene where the camera is trained solely on Boyce during his free fall before opening his parachute was fantastic.

While I said Overlord is a great film in its own right, it also has its faults. Almost half of the film is spent inside an attic and as a viewer knowing that some fun and horrible action awaits it can become frustrating. In this way it differs from the 2004 horror film Dawn of the Dead. There is a great opportunity in Overlord to just get right into the action, but after the opening scenes it decides to wait – for far too long. This is an action/horror. The type of people who this film is made for don’t want to wait until two thirds into the film to get to the rub of it. While the time spent in the attic (aside from one scene) is well written, those scenes felt like they belong in a different film.

Overall it is a solid movie – exciting in parts and boring in others – like many movies are. It just lucky that the cast and the film makers were able to put it together so much better than your average B movie.