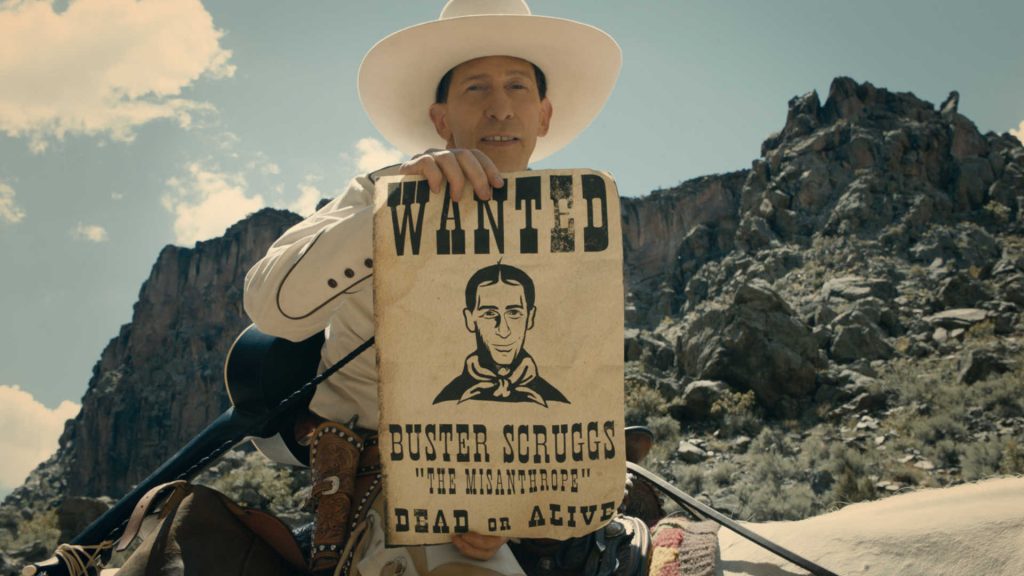 I don’t like Coen brothers’ films. I did not like Fargo, I hated The Big Lebowski (yea that’s right, I said it, dude), I was not a fan of O Brother, Where art Thou? The Ladykillers was a complete bore. No Country for Old Men bucked the trend until the very end, where…there was no end, Tommy Lee rocks up to a dead Llewelyn and a whole lot of questions. But then I saw the trailer for The Ballad of Buster Scruggs, I saw the amazing actors involved, most of all being Tim Blake Nelson, whom never fails to impress, and I thought, this time, this time will be different. Without looking into it any further, I made sure I got to see it – and like a pokies addict who always thinks the next spin will be the jackpot, I was let down again.

The Ballad of Buster Scruggs is the Coen Brothers 18th film and is a Western anthology film, with six chapters exploring different perspectives of the American frontier.

The Ballad of Buster Scruggs is the first segment, it is a fantastic short film. It is completely sidesplitting – the whole theatre was laughing almost the whole way through. The set pieces were great, the supporting cast was eccentric, and Tim Blake Nelson was absolutely fantastic. It follows Buster on his journey through out the old west, singing and gun slinging until his own demise may come along.

The next segment was Near Algondones. James Franco stars as a bank robber intent on getting away with the cash. Standing in his way is an odd bank teller. The teller is played to perfection by Stephen Root, he is completely and utterly hilarious – it is a performance that will probably not garner as much recognition as it should. Franco also gives a decent performance but Root is the real shining light of the segment and once his screen time is over there simply isn’t too much too like about the segment – aside from a hungry horse.

Near Algondones is followed by Meal Ticket. This is by far the worst of the segments and sitting through it – keep in mind it was only 15-20 minutes – was agony. Liam Neeson plays a nomadic showman whose only exhibit comes in the form of an armless/legless artist played by Harry Melling. Neeson character sets up the show, Melling’s character sits on a chair and recites versus of Shakespeare and the bible (I think). It is a truly depressing and boring story and by the end of it, I was ready to walk out of the cinema. Again though, the performances are great.

Then All Gold Canyon comes on and is a delightful change of pace. It stars Tom Waits as a gold prospector who happens upon an absolutely stunning location. After scaring all of the animals away he finds a few shards of gold in the creek and knows, just knows that there is a gold vein somewhere. The beautiful canyon is the real star of this segment but Tom Waits is a very close runner up. He puts in a great performance amid the great scenery, and while he is one of only two characters in the segment, that is enough.

The Gal Who Got Rattled stars Zoe Kazan as Alice, whom is travelling to Oregan with her brother, who may be planning on having her married. He passes away during the trip and she is subsequently wooed by Mr. Knapp, played by Bill Heck. Both give great performances and make this short story pleasant to watch. While not much happens, the story could easily be expanded into a feature film.

The last chapter is The Mortal Remains. It is a very gruelling experience and is filmed almost entirely inside of a carriage. With a number of different characters travelling together – two bounty hunters, a woman travelling to reunite with her husband and a Frenchman. Brendan Gleeson is great as always as one of the bounty hunters, Tyne Daly, as the woman is also great, and Saul Rubinek as the Frenchman is enigmatic. Aside from the performances, there are no positives. It is a short film that feels like it goes for far longer than it should. There is a whole lot of talking, and arguing with nothing really being said or solved. If you make it past The Gal Who Got Rattled when you watch when it releases on Netflix, skip to the end.

The Ballad of Buster Scruggs is not your average movie, but no Coen brothers’ movie is your average movie though is it? If you are determined to watch it, do so knowing that is it is a bunch of chapters, because thinking that it is just one film is a major let down. I was not prepared in the slightest which also brought my experience watching this film down. Maybe had I been a little more aware of what I was walking into, I would have enjoyed it a bit more. I enjoyed the segments The Ballad of Buster Scruggs and All Gold Canyon and was not unimpressed with The Gal Who Got Rattled. I got through Near Algondones unscathed, but Meal Ticket and The Mortal Remains were two of the worst things I’ve watched in the cinema. If it weren’t for the all-round great performances the Coen’s managed to get from all of their stars I would probably give this effort a 2 out of 5 for the amount of segments I really enjoyed, but because of their skilled leadership The Ballad of Buster Scruggs garners a 3.5 out of 5.