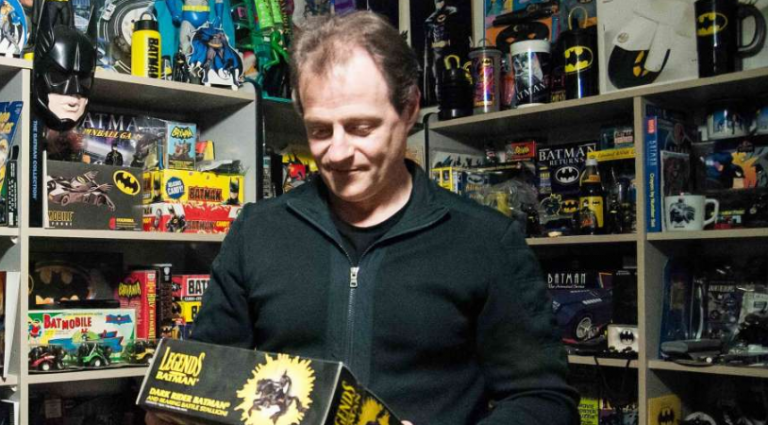 Darren seems like a good bloke, an average Joe who works hard and lives a peaceful life. He’s made some short films and been on family feud. But what is most interesting about Darren, which you wouldn’t know by looking at him, is that he has a dark secret. A Dark Knight secret. He’s a collector.

But what does he collect?

Well, he started off with Star Wars collectables, but when it turned out that someone else, he knew was already on top of that, he realised he needed to focus on something else.

In the late 1980’s, Tim Burtons Batman, starring a pretty bankable Michael Keaton was released and as such, the merchandise hit the shelves. Desperate to be a part of the nascent geek culture, Darren forked out every cent of cash on Batman merch he could, and not always at shops, and sometimes it wasn’t cash, sometimes it was dignity.

Some thirty years later, Darren and his partner live in their nice, tidy home, mostly free of the stresses of needing to buy the next collectable, but still with a reminder of what a decade of reckless spending looks like.

An entire room full of Batman collectables, identified by a single bat symbol on the front of the door.

Batman & Me is a very intimate look at Darren Maxwell’s collection, director Michael Wayne delves deep into what it means to be obsessed with collecting memorabilia.

But Batman & Me also looks at Maxwell’s life post-collector, how has obsession affected him, what has it led to and more.

Hear from Michael Wayne below:

Batman & Me was a fun film, how did you get along with Darren? Was it a fun shoot?

Darren’s energy and enthusiasm made filming fun. He and I got along very well during the filming, and even from the outset of the project, because he understood exactly what we were going for. I imagine it would be quite daunting to put your entire life up for analysis by a wide audience, but he did it without trepidation and was enthusiastic about sharing his experiences.

Was there anything left out of the film that you wished had made it in?

There were plenty of other bizarre and sometimes depraved stories from Darren’s collecting days I just didn’t have room to include. One thing we shot that would have been nice to include was a sequence in which Darren had to open a mint-in-packet collectible just to see how he’d react. It was interesting, but it just didn’t fit.

If you were given a choice, what would you take from Darren’s collection for yourself?

I’ve been carrying around a Batman figurine keychain for 25 years; it’s beyond battered, and you can barely tell who it was ever supposed to be. Of course Darren had one still sealed on his shelf so I’d probably go for that, hard as it is to pass up the allure of 30-year-old ice cream.

Given Darren’s own experience in filmmaking was he able to offer any insight or have any suggestions during filming?

Although Darren was never shy about sharing his thoughts on directing, he understood it wasn’t his film and let us go about our business largely free from backseat direction. What his experience did lend our production was a subject who thoroughly understood what a day of filming entails, and was always prepared for one more take.

You share the same last name as the caped crusader’s true identity, did that ever come up in conversation?

Only when I came to set in full Batman garb.

Watch Batman and Me via the Melbourne Documentary Film Festival here.