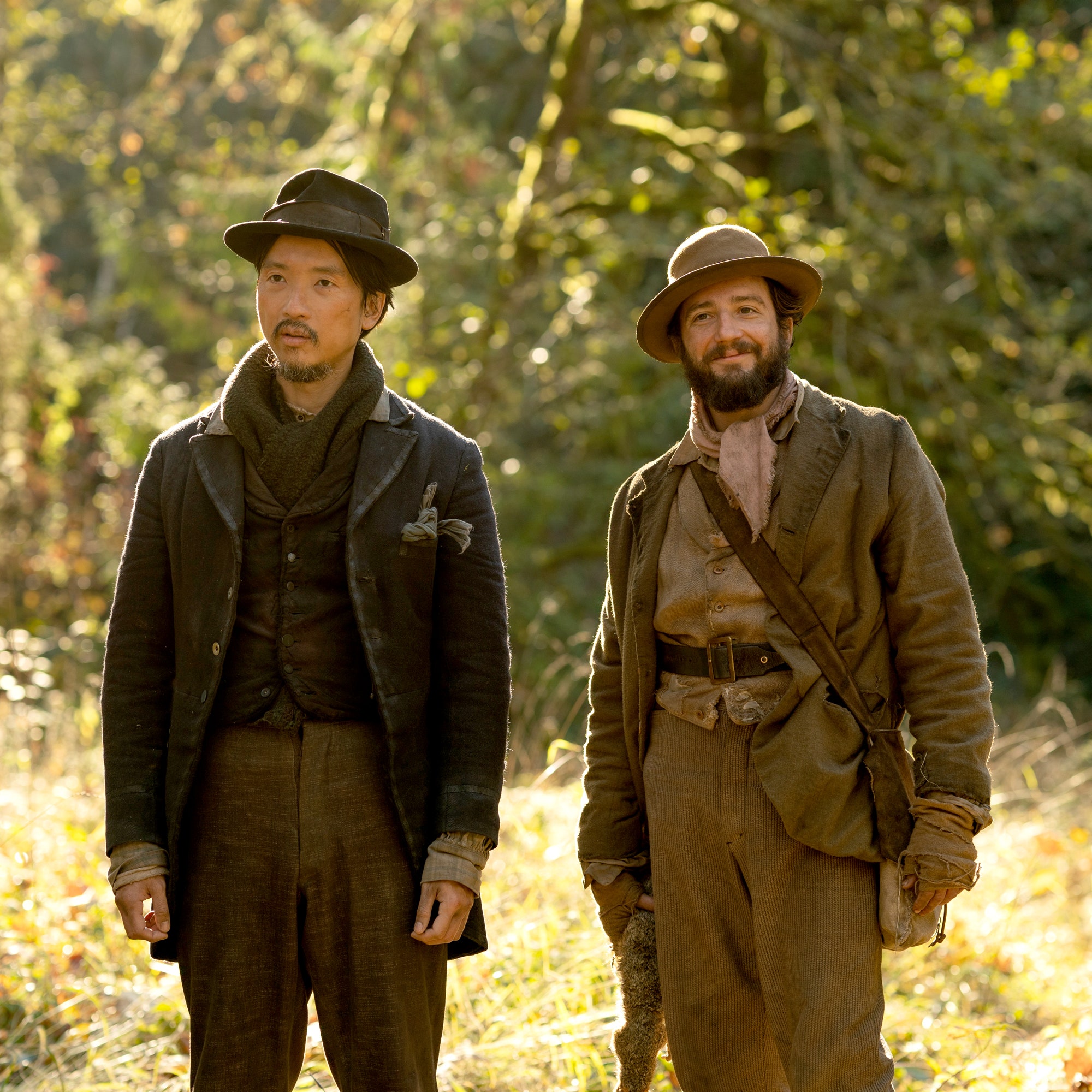 
Kelly Reichardt’s First Cow is quite simply a masterwork of gentle filmmaking that through the lens of a small story manages to encompass the zeitgeist of the American Dream as it is imagined in 19th Century Oregon and the pioneer experience. At once a tale of hope and survival, it is also a document of deep friendship in a landscape that marks men out for their masculinity and violence. It is a testament to Reichardt and writer Jonathan Raymond that such an intimate work says so much about what it is to be human, kind, and seeking a place in an indifferent world.

Cookie (John Marago) is a cook who is travelling with a crew of drunken and hard fur trappers through the Pacific Northwest in 1820. Unlike the men in his camp he is gentle and instead of fighting the land he finds himself in, he honours it in small gestures. Whilst seeking out food for the camp he gently lifts a lizard that has found itself on its back and rights it. This act immediately signals the sort of man Cookie is. One day whilst foraging he comes across a naked and starving Chinese immigrant. King-Lu (Orion Lee) is hiding from Russian trappers who want him for murder. Instead of alerting his campmates to King-Lu’s presence Cookie feeds him and helps conceal him in his tent. Thus a friendship is formed that anchors the film. The Russians come looking for King-Lu, but the wily man eludes them. There is a sense that King-Lu is no stranger to trouble but has learned to survive through his wits. Cookie’s survival is based more on his passivity and general good will.

Finding his way to a hardscrabble port, Cookie re-unites with King-Lu who now lives in a cabin. In a small reversal of fortune Cookie is now the man who needs a home and King-Lu provides it. They immediately form a partnership that is based in kindness and a mutual need for companionship. The film begins with a quote by poet William Blake; “The bird a nest, the spider a web, man friendship.” In a land filled with men whose interests are to conquer nature and somehow civilise the country through violent and genocidal means (Reichardt represents the First Nation Americans in the film), Cookie and King-Lu stand out for their simple goals.

For Cookie what he’d like best is to own a small bakery, or perhaps a boarding house. King-Lu has grander plans. Already the American Dream and burgeoning capitalism come to play in the film. How do the pair make the money to get a start? Enter the titular first cow. Cookie will make sweet treats to sell to the settlers. The only problem is that to do that they must steal milk from the only cow in the region that happens to belong to the cruel and snobbish Chief Factor (a wonderful Toby Jones).

Under the cover of night Cookie and King-Lu milk the cow. Some of the most touching dialogue in the film comes from Cookie speaking to the cow as he performs the task. The sweet making venture is a success, but it carries increasing risk as it is inevitable that the ruse of stealing milk will come to light.

Reichardt excels at slow cinema that never wastes a frame or a moment. The production design is exquisite and creates a palpable sense of the hardscrabble frontier. Christopher Blauvelt who worked as director of photography with Reichardt on the stunning Certain Women, once again manages to capture the beauty of the landscape with intricate detail. Reichardt is a director who manages to give landscape almost its own characterisation. The harshness of the frontier in Meek’s Cutoff to the rural small town and its surrounds in Certain Women, each space not only is a place that the characters inhabit, but it is also a place that forms the characters. The giant redwoods and lush forests of First Cow are exquisitely rendered giving an almost painterly quality to the film. Reichardt who also edited the film allows the camera a kind of grace that is rare in contemporary cinema.

John Marago and Orion Lee are marvellous as the central duo. Although it seems an unlikely friendship not one aspect of it appears forced or false. Marago especially gives an understated but heartfelt performance. Surrounded by violent men who brawl in bars or over who they think is drinking too much of the rations, Cookie and King-Lu demand the audience’s attention for being all that the other men are not. Top-tier character actors Toby Jones and Ewan Bremner also provide excellent performances. Toby Jones may just be one of the most underrated actors currently working. His turn as the venal and foolish Chief Factor is a masterclass in conveying self-importance.

It’s difficult to write about Kelly Reichardt because it feels like words are inadequate to convey just how accomplished the American auteur is. Every frame is superb, every beat is felt. Her work is simultaneously delicate and devastating. Perhaps one day audiences and critics will take up the term “Reichardtesque” instead of “Malickesque” when describing tone and direction; hopefully First Cow will help cement it in the lexicon. It is most certainly deserved.